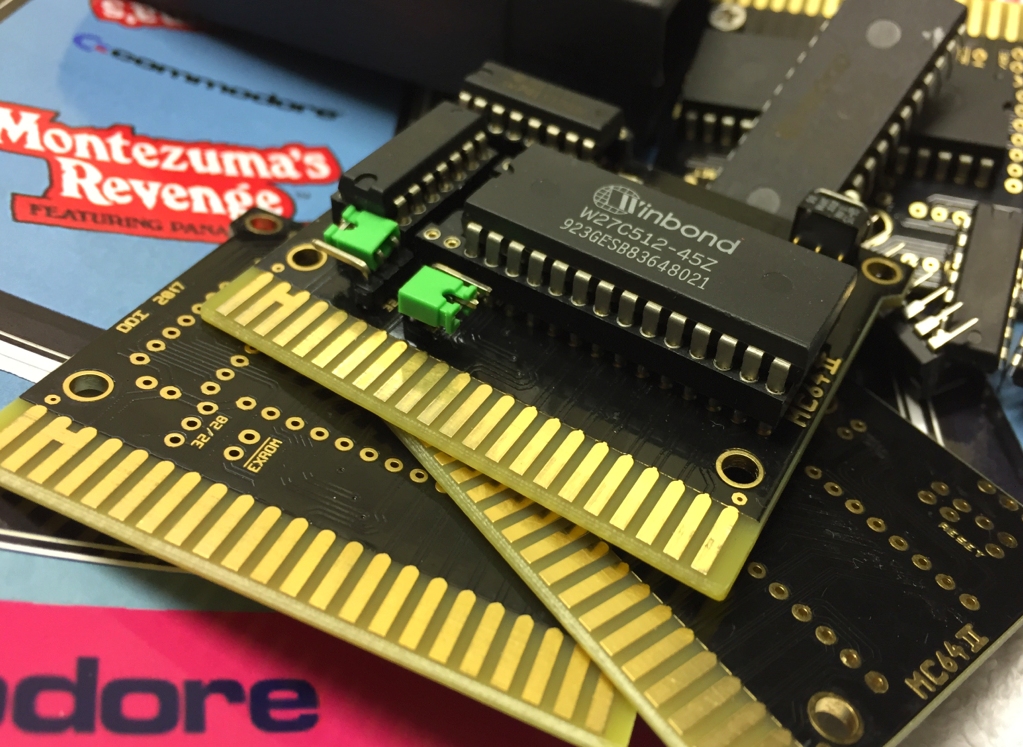 I really like the cartridge format for the Commodore 64 (link). The simplicity of loading games by inserting the cart into the Expansion Port, turn on the machine and boom – the game is ready to go! It does not get any easier than that. In this context, the original C64 cartridges came in different flavors and included among others the standard 8/16kB carts (e.g. Comal 80 & Galaxian) and freezer carts (e.g.  Final Cartridge III & Action Replay). More recently the Easy Flash cartridge (link) was developed and I have also burned a few 8/16kB single side games/programs using cartridge hardware that I got from Sharewareplus (link). However, creating custom cartridges that would look like they were professionally made by the original game developer (nice start-up screen with music and then the actual game) has been on my wish list for quite some time. Especially those games that have not been released on cart like Montezuma’s Revenge from Parker Brothers (link), Giana Sisters and Bubble Bobble. Sure, I could make an Easy Flash cart with e.g. the Draco Cart Maker but this would just give me a start menu that the games should be loaded from. So I was more than thrilled when Mongooseman sent me a pile of cartridge hardware. Apparently, he has noticed my profound obsession with Montezuma’s Revenge (link1, link2, link3) and decided to do something about it! He even sent me stickers for the cartridge cases. Nice!

The black PCB’s are created by Dale from DDI (Dungeon Dwellers Inc.) (link) and they come with golden soldering VIA’s (Vertical Interconnect Access) and are called Magic Cart’s. The Magic Cart is based on the original Commodore 64 Magic Desk cartridge and can hold up to 256kB of ROM. The Magic Cart is an implementation of the Magic Desk Cartridge Generator Project by Zarko Zivanov and Marko Šolajic (link) which allows for converting disk based programs (.prg’s) to a Magic Desk multicart format. DDI modified the software in order to create menu based multicart images (up to 20) of single load disk games and programs for the Magic Cart.

The hardware that was sent to me is a custom version of the Micro Magic Cart that DDI made for Mongooseman. The PCB holds a reset button, two LED’s, support for 28/32 pin EPROM’s and Ocean games by grounding the \EXROM line of the expansion Port. To complete the cart a suitable sized EPROM (32-256kB), a 0.1μF capacitor, a 74HCT02 and a 74HCT174 are needed. And of course a .bin image with the game(s).

One of the Magic Carts already had sockets soldered in to make it easier to test new images. The green jumpers are for setting the cart for using 28/32 pin EPROMs and Ocean games. The brown 130Ω resistor is for dimming the LED, but since the case is black I simply left out the LED on the ones I made. Notice the shorted via’s next to the ceramic capacitor indicating that a 32 pin EPROM was used for this particular cart.

First I burned a 27C020 32 pin EPROM (256kB) with a Montezum’s Revenge image as I just wanted a single game on the cart. As the cartridge case i quite narrow, the parts were soldered directly onto the board before slapping on one of them nice stickers! I also left out the reset button to keep the case intact – don’t think Parker Brothers ever placed a reset button on any of their C64 game carts.

Mongooseman made me this custom start-up screen with ‘breadbox64.com’ written on top of the game logo. My life is now complete!! Pressing the space button and Panama Joe is ready for some ‘da-da-da-da-dom’ action!

As I was given several Mini Magic Carts I used the opportunity to make cart versions of some of the other games that I had on my short list. I made carts of The Giana Sisters and Bubble Bobble. The carts were placed in modified plastic Universal Game Cases with custom made foam inserts and cover art. The carts got stickers with logos… Giana Sisters even has a start-up screen with music – nicely done Mongooseman!

Using DDI’s software for creating game compilations is pretty straightforward while adding intro screens with music may be a little more tricky. These three cart games are a real treat for my collection of Commodore 64 gear – thanks a million Mongooseman!