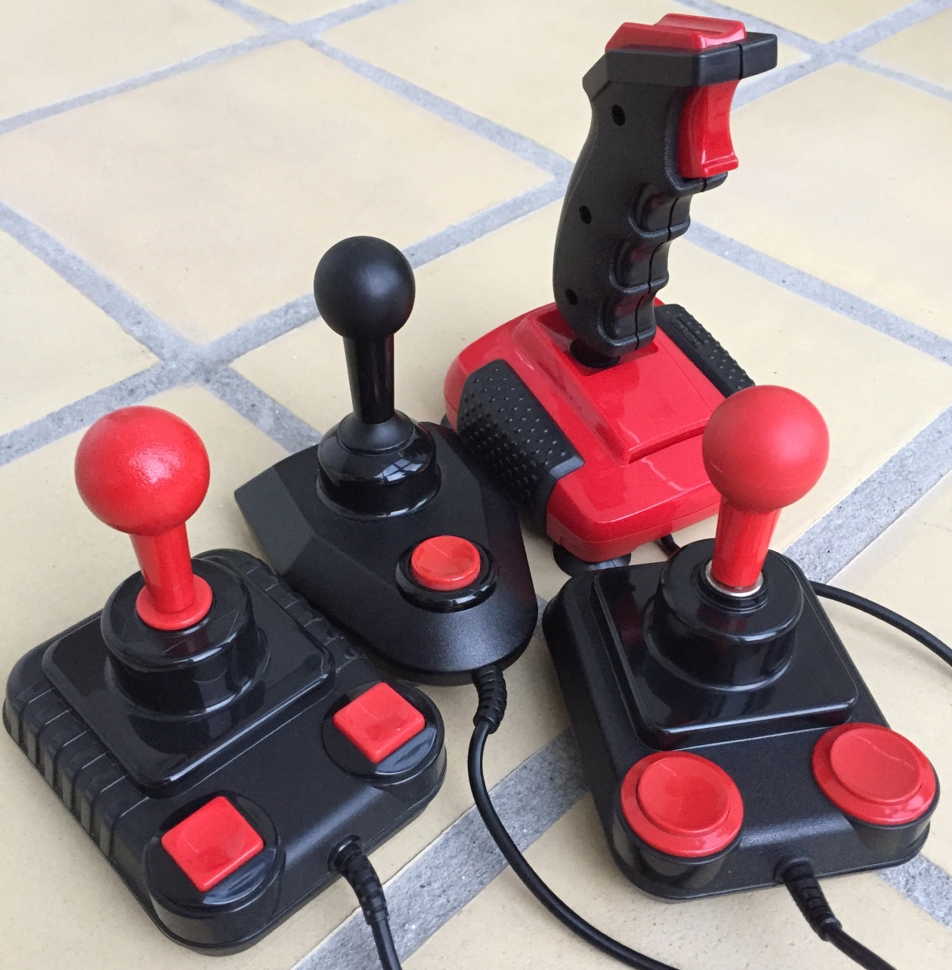 The repeated pounding on the fire buttons combined with the way most platform games have the hero go towards the right side of the screen, may eventually wear down the micro-switches in most Commodore 64 joysticks. The first sign of wear is usually in the form of a sluggish response from the fire button of choice or when moving the stick in a specific direction without getting any response (like to the right). There is an easy way to repair most of the better quality joysticks and that is by replacing the micro-switches with new ones. New micro-switches can be bought online in shops which carries electronics for arcade machines. The force that needs to be applied to activate a micro-switch differs between brands and models. My favorite micro-switches are from Cherry (model D44X) as they have the perfect combination of pressure and sound when being pressed. Here are some of the micro-switches I have laying around.

This is my all-time favourite joystick. I got this in the late 1980’s and it is still my joystick of choice, especially for platform games like Montezuma’s Revenge, Ollie’s Follies and Rick Dangerous. A variant of the joystick is he SuperPro ZipStiks which had yellow fire buttons and rubber suction cups on th e bottom. My ZipStik has red fire buttons and the rubber feet are still intact on the bottom. It is actually in a really great shape, even after all these years.

This is the runner-up of joysticks for the Commodore 64 in my opinion. Some might even argue that this is the best joystick there is. However, I think that the spring that forces the shaft back to its resting position is too hard and my hand muscles get tired after using it for a while. The fire buttons use leaf switches which does not give the same physical feedback as micro-switch based buttons do. Swapping the original micro-switches for new ones is not too big of a job really.

The fire button leaf switches are basically made from two metal parts that touches whenever the button is being pushed. Over time they may become separated to the point where pressing the firebutton does not make contact anymore. Some small pliers can be used to bend them just a little towards each other hereby reducing the gap between the contacts. A Q-tip with some rubbing alchohol can be used to remove any residue on the contacts.

This is another joystick in the same category as the above. The copy I have is working flawlessly so I just cleaned it real good. The stick uses micro-switches while the fire button has a leaf switch like the Competition Pro. I have never gotten used to play with this stick. I just keep missing the fire button due to its location directly in front of the shaft.

This is the best joystick for racing games like Outrun or athletic games like Daley Thompson’s Decathlon where you need to move the stick from side to side really fast. This one has just been taken apart and cleaned on the inside as it was still working without any problems. So no exchange of micro-switches or anything.

The QuickShot II Turbo joystick has no leaf switches nor micro-switches. Everything i custom made for the joystick and soldered on to the PCB. When moving the stick small stand-outs will push down on the little springs to make the connection. Care must be taken when cleaning the internals of the joystick.