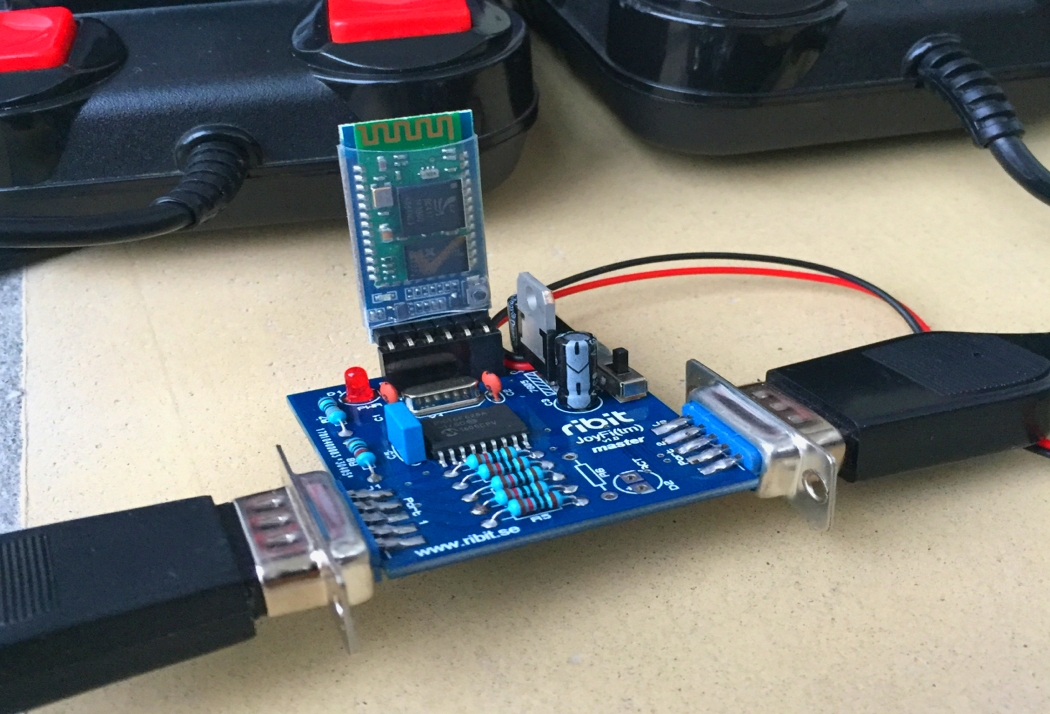 My Commodore 64 gaming escapades are usually done at my basement workbench after the family has gone to sleep at night. But once in a while I bring a machine up to the living room to play on the big screen TV. Even though the image from a C64 on a modern day TV kinda stinks (even with the aid of a LumaFix64), nothing beats playing at 50+ inches, laying supine on the couch with plenty of soft drinks within reach! However, the distance between my living room TV and the sweet spot of the couch is close to 15 feet (4.5 m). In order to cover this distance, several extension cords have to applied (along with warning signs) to keep pets and kids from running into the cords and causing an accident – don’t want that old hardware to go flying onto the floor, right?

I have therefore been looking for a wireless solution to the above mentioned setup for a while. It turns out that a guy in Sweden (RiBIT.se) has made the perfect solution to all my C64 wireless gaming needs. Among joystick testers and power supply voltage protectors, RiBIT has made a device called the JoyFi V1.0 that lets you play games using original 9-pin joysticks on the Atari, Amiga and C64 wirelessly. The device consists of two PCB’s that are connected to the joysticks (Master PCB) and the Commodore 64 (Slave PCB). The Master part is powered using a 9V battery. The wireless connection is based on a Bluetooth connection and after booting up the machine, the connection is made within seconds and booom – wireless Commdore 64 gaming up to 10 metes away!!

I got the JoyFi V1.0 on Ebay for about  30 $ (25 Euro) + shipping from Sweden. The Ebay version comes assembled while an unassembled version can be found on the RiBIT.se website at about 19$ + shipping.

This is the package I received from Sweden – fully assembled, tested and ready to plug-and-play!

The Master PCB has two male DB9 serial ports for attaching the joysticks. A 9V battery (not included in the package) is needed to power the device. Joystick port labels can be found directly on the PCB. There is an ON/OFF switch near the Port 2 plug. When turning on the device, a red diode is lighting up on the board.

The Slave PCB has two female DB9 serial ports for attaching the joystick to the C64 joystick ports. Port 1 plug is soldered directly onto the print while the Port 2 plug is connected to a ribbon cable. Port numbers are written directly on the board.

The big red diode lights up when the Master device is turned on! A smaller diode is flashing on the Bluetooth antenna/module until it has been wireless connected to the Slave board.

The Bluetooth antennas mounted on the PCB’s. I could not find any markings on the antennas in regard to the direction they should be mounted. However, if the small diodes on them do not flash after power has been established, they have been mounted wrong!!

Two joysticks mounted to the Master board of the JoyFi wireless joystick device.

The Slave board mounted into the joystick ports of the Commodore 64.

Full of anticipation I turned on the Master PCB and the Commodore 64 with the Slave board attached to. After 2-5 seconds, the two bluetooth modules had found each other (as indicated by the diode flash sequence) and I could start testing the JoyFi. First I tested that both joystick ports were working properly using my 64 Doctor test cart. Everything looked fine. I then loaded the platform game of Montezuma’s Revenge (link) as this game needs very precise joystick inputs or else Panama Joe will fall of a platform and die! After about 20 seconds of gameplay I completely forgot that I was testing the JoyFi as I did not experience any lag (latency is about 6 ms) or any other issues that would remotely hamper my gaming experience.  I even tested it at a distance of about 8 meters without issues. All of the above kinda makes it hard to do a critical review as the device simply works right out of the box. Well, there is one teeny-tiny thing and that is the lack of mice and paddle support. However, using a mouse usually calls for having the keyboard within reach and I very rarely play paddle games anyway so this is by no means an issue for me – truth is I never ever play paddle games or use a mouse!

I can truly say that the JoyFi system for wireless gaming is a must-have for anyone who likes to play their Commodore 64’s (or Amiga or Atari’s) more than 5 feet away from the TV. I experienced no lag or any other issues with the system while in use. Even though I like the blue PCB’s, I do think that especially the Master device would benefit from being placed inside a box of some kind to eliminate the risk of shorting the bare PCB while in use. However, this is not a big issue as the PCB can just be placed on something non-conductive – like the edge of the couch.

I can truly say that the JoyFi is an awesome wireless option for wireless C64 gaming. If you want to go wireless – this is the device to get! Highly recommended. Well done RiBIT!