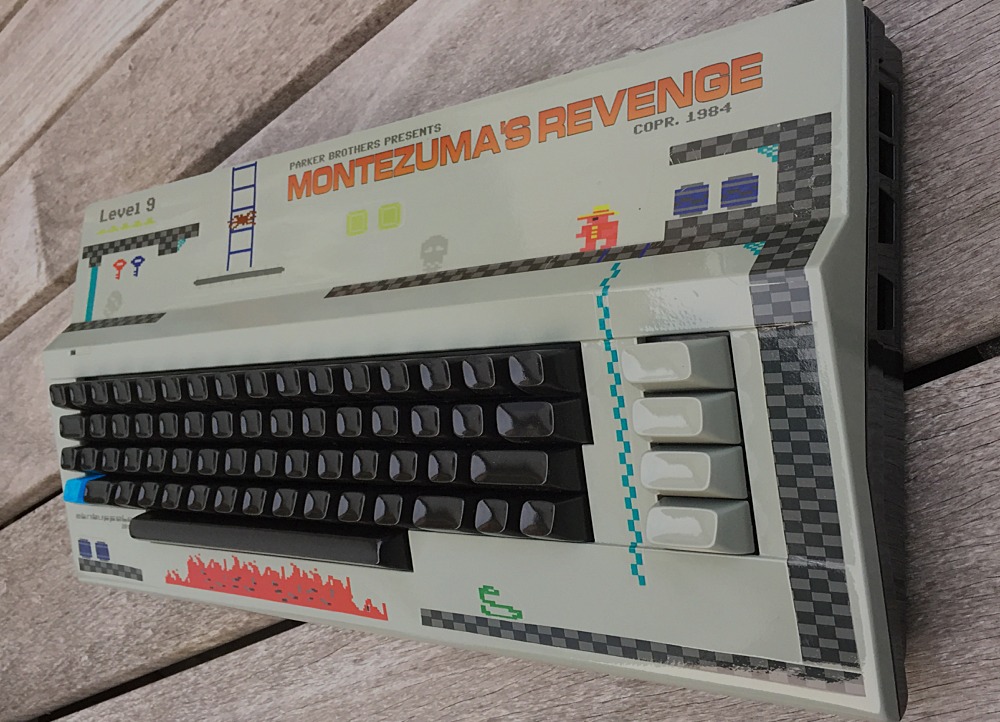 Montezuma’s Revenge is by far my all time favourite game for the Commodore 64 (link). Maybe it’s because the gameplay is so simple. All you have to do is find keys, open doors, don’t get killed, get to the bottom of the maze, repeat… In this context, I have been wanting to mod a Commodore 64 C case for quite some time and what would be better than a Montezuma’s Revenge C64 Case mod? This is how I ended up with a C64C case looking like this…

First up was closing all the ventilation holes in a very yellowed C64C case. First I removed all badges and applied some Plastic Padding filler. The holes were easily closed using a small scraper.

The following day, all excess material was removed with 180 grain sandpaper.

Next up was the keys. I used some sticky adhesive pads to fix the keys to a plexiglass board. This also raised the keys off the surface for a perfect paint job and made it easy to move it outside for painting.

I used a plastic primer, some colored paint and glossy varnish.

The black color looks quite nice. The Function keys were greyed while the Commodore key was painted blue!

I made some Montezuma’s Revenge inspired graphics that was printed on some clear waterslide decal paper. A sheet was made with all the C64 keyboard characters but was later omitted as they are invinsible on the black keys. The location of the graphics were tested before the application.

This is the high resolution graphics file I used for printing the decals.

I used a tweeezer, a bowl of warm water, a pair of scissors, a sponge and an x-acto knife for the transfer.

Unfortunately, after spending hours with the waterslide decal paper, I decided that the black case color was just too dark. The graphics just did not show up too well. So I removed the decals and re-painted the top part of the case in grey. The result was way better!

After several coats of glossy varnish, the case ended up looking like this…

The black bottom that matches the color of the keys.