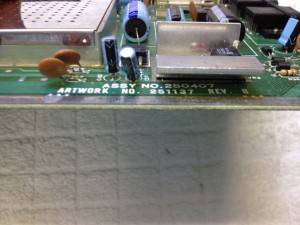 When I got this on my workbench nothing worked! Black screen and no light in the power LED at startup. Using a multimeter I tested the voltage on the two voltage regulators (7812 & 7805). No voltage here. I then measured the voltages at the power plug. The board was getting power, but somehow it did not get through to the PCB. I then applied a ton og contact cleaner to the power switch while working it up and down like 50 times. I also cleaned the rest of the plugs with the same contact cleaner (serial port, AV port, joystick ports, user port and expansion port). I removed all socketed chips (SID, VIC-II and the small chips surrounding the VIC-II chip) and used contact cleaaner on them as well. After drying all of the remaining cleaner with a blow dryer, I reassembled everything and turned the machine on. I now got to the BASIC screen but all the letters and numbers were in rainbow colors. 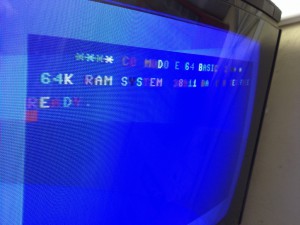 Commodore 64 guru, Ray Carlsen suggests replacing U29 (74LS74 logic Divider) as this chip may cause the startup screen to show normal characters in multicolored “rainbow”. 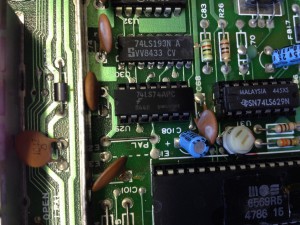 Replacing the chip did not change the rainbow colors. So I took a closer look a the PLA chip at U17 once again. 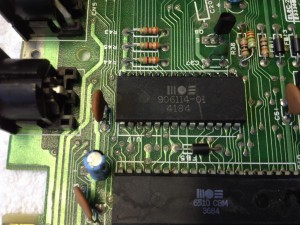 I decided to remove the PLA, soldered in a socket and replaced the PLA with a more modern one I got on Ebay. 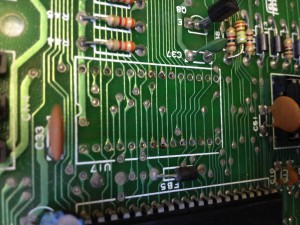 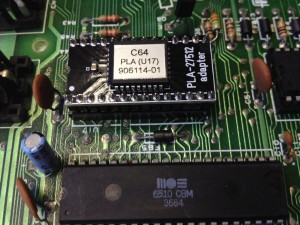 It turned out that it once again was the PLA chip that were causing trouble!  The machine had been brought back to life! 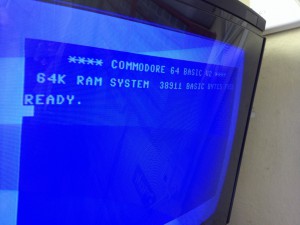