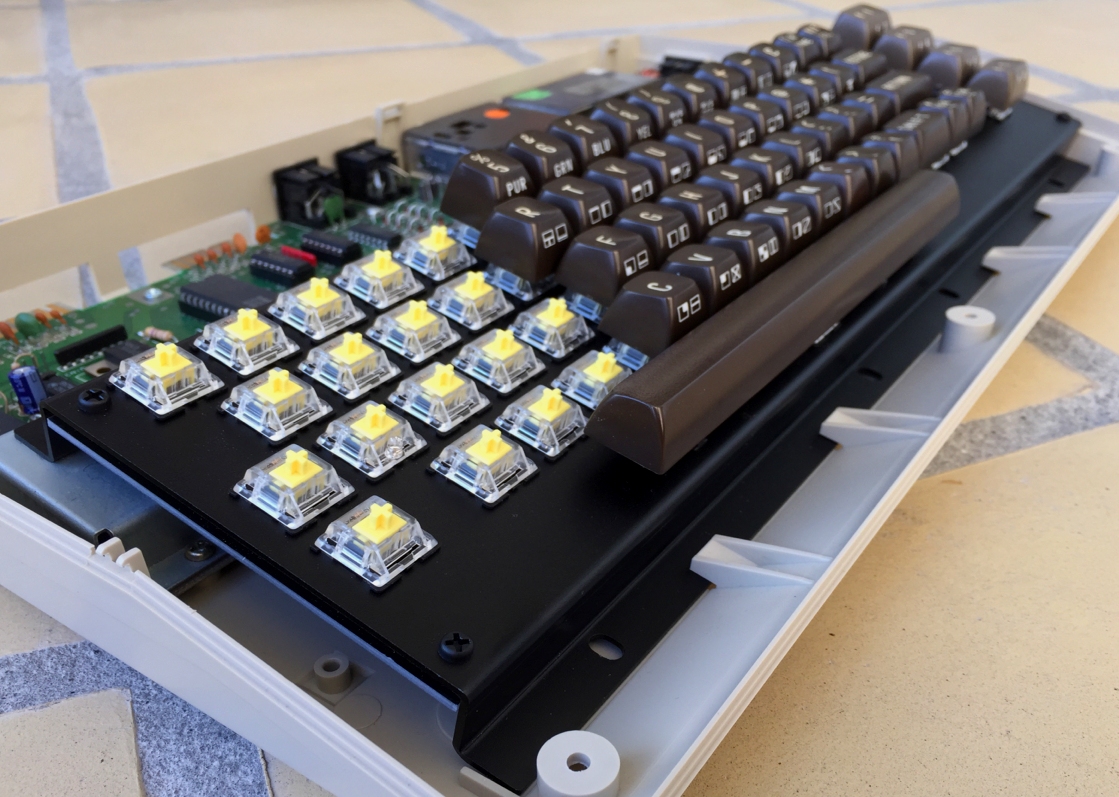 It’s finally time to show what has been clutting up my workbench for way too long! Back in 2015 I got my hands on two C64 Reloaded boards (link) and installed them inside cases from the Kickstarter campaign (link). I also entered the Phase5 Indiegogo campaign to get some sweet new keycaps. Thus, all that I needed to have two brand spanking new Commodore 64’s was some new keyboards. So the basic idea was to simply make two new keyboards as no one else seemed to have picked up the idea… How hard can it be, ehh? Well, more than two years have passed since I initiated the biggest Commodore 64 project that I have ever done. Truth is, the project was laying kinda still until a few months back when I decided to just get on with it. Following the presentation of the first working prototype back in March (link), I redrew the bracket and made small adjustments to the PCB. So without any further ado, here is the final version of my new mechanical keyboard for the Commodore 64 – the MechBoard64.

The MechBoard64 is a drop-in replacement keyboard for the Commodore 64, including the new motherboards (Ultimate64 (link) and C64 Reloaded (link)). The keyboard is based on microswitches from Gateron, lasercut aluminum brackets that are anodized in black and a black PCB. The MechBoard64 consists of 123 individual pieces and 200+ soldering points connect it all. This post is an elaboarion of the build of the MechBoard64 for my two C64 Reloaded boards. Hope you’ll enjoy it as much as I did creating it.

The Printed Circuit Board

The PCB is black because I wanted it to have the same color as the C64 Reloaded boards. We want things to look nice, right? I had the PCBs made in 2 mm thickness to make them as sturdy as possible. This is overkill as all force during key presses will be on the aluminum bracket and not the PCB… At the bottom right side of the board is the Shift Lock circuit which handles the functionality of the Shift Lock key without using a locking type switch. The circuit is described in further details below.

The PCB has two 20 pin angled male pins headers at each end of the PCB. A short 20 cm ribbon cable is used to connect hte MechBoard64 to the motherboard of the C64. Depending on the motherboard version I can simply use the pin header that is the closest to the socket on the C64. Text near the 20 pin pin header indicates what motherboard each pin header is best suited for…

The first prototype had a bracket (the part holding the microswitches and the PCB) made of black acrylic plates (link). They had a thickness of 2 mm which is too thick for the Costar plate mounted clips, the microswitches and the C64C slim cases. These parts need 1.5 mm plates to snap into place correctly. The acrylic plastic is also very brittle and may break during normal use. I therefore completely redesigned the bracket using 1.5 mm black anodized aluminum which is way stronger and similar to modern high-end mechanical keyboards. The aluminum bracket is also a nice addition to the great looking C64 Reloaded and Ultimate64 boards! The aluminum brackets have been lasercut and bend by hand and they have submilimeter precision. The finish really exceeded my expectations and is almost too good looking considering that it will be hidden inside a case…

The holes for attaching the keyboard to the internals of the Commodore 64 have been slotted to make small adjustments possible during installation. To finish everything off, black nylon screws, black nylon spacers and black nylon nuts were used to attach the PCB to the aluminum bracket.

I spend quite some time on deciding what microswitch I wanted to use for the MechBoard64. However, I quickly decided to use microswitches from Cherry mx or Gateron as these seemed to be the most used in modern keyboards and would also be available in the future. To this end, each manufacturer has different types of switches (linear, clicky, tactile) that need different amount of force to activate. I therefore invested in a little microswitch testing board and ordered pretty much all the different flavours of Cherry mx and Gateron switches. The test board made it quite easy to test the different microswitches from both manufacturers at the same time while having an original C64 keyboard as reference. It quickly came clear that the Cherry mx reds (45 g linear) and Gateron yellows (55 g linear) resemble the original C64 keyboard the best. However, the Gateron switches have a smoother feel when pressing them and they are also almost half the price of the Cherry’s. Both manufacturers guarantee that their switches work for at least 50 million keypresses which should be more than enough for all my C64 typing needs! So my new keyboards both have Gateron yellows installed…

The keycaps were removed from donor keyboards of two original Commodore 64 breadboxes as I’m still waiting for the new keycaps from the Phase5/Indiegogo campaign to finish. Using a keycap puller made the job very easy and reduced the risk of breaking the fragile plastic pegs on the old C64 keyboards.

In order for the original C64 keycaps to fit the stems of the Gateron switches, 3D printed key adapters have to be used. A guy on Deskthority (link) made the CAD drawing and I’ve updated them slightly for an even better fit. The keycap adapters are made from Shapeways in a material called Strong and Flexible which is also known as Nylon Plastic, PA12 or Polyamide. They are printed using Selective Laser Sintering (SLS), which is strong enough for structural components. The 3D prints fits really well and are easy to attach to the stems of the microswitches. The same goes for attaching the keycaps on top of the adapters. It is important to note that the 3D printed key adapters only work with the Cherry mx style switches (e.g. Gateron) and the standard Commodore 64 keycaps. Other C64 keycaps, like the ‘strange’ ones shown below, will not work and hence cannot be used with the 3D printed key adapters!

Special shaped adapters are used for the stabilizer wire of the Return key. All 1.5u sized keys (Shift keys, Function keys, Restore and CTRL) have a 3D printed stem installed into the free hole to stabilize the keys during key presses. The stabilizer system of the Spacebar simply uses the same 3D printed key adapters for the Costar keycap inserts.

The Spacebar and Return keys both have a stabilizing wire installed underneath to keep them stable regardless of where they are pressed during use. Costar plate clips were snapped into the rectangular slots near the two keys while stabilizer wire were added to the Return key and Spacebar keys. I installed the two keys before anything else in order to have as much room as possible for fiddling everything into place.

The Spacebar stabilizer wire is placed behind the spacebar in order to get as far away from the edge of the bracket as possible. This was to ensure that the bending tools did not alter the dimension of the slots. I used a flat headed screwdriver to gently push the mircoswitch stem down in order to attach the spacarbar.

I then installed the Return key. First the stabilizer wire was installed into the Costar keycap inserts before snapping it into the two plate mounted inserts. Again, a flat headed screwdriver was used for snapping everything into place.

I had to make my own stabilizers as the size of the SpaceBar is very long (size 9u!). I used a tool called DuBro EZ Bender #480 and some piano wire. Before I even had the first stabilizer made, I broke the die… typical, right? I also found that the 1.19mm wire was a bit too thick for the costar keycap inserts. After replacing the broken die, I got some thinner 1.00 mm piano wire and after that, making the stabilizers went pretty fast.

This site uses Akismet to reduce spam. Learn how your comment data is processed.