One year and 64 posts later… Exactly one year ago, the first blog post was uploaded here on breadbox64.com – and today the 64th (quite a coincidence in numbers there, eh?) post is being uploaded! During the last year many many hours of soldering, faultfinding, game-playing, videotaping, neck-scratching, searching the internet for answers and article editing have been spent. The traffic on the site shows quite an interest for modding retro gaming gear and especially the Commodore 64. Guess I’m not alone after all!! For some (to me unknown) reason the C64 RapsberryPi Mod (link) is getting a lot of hits. It gets almost twice as many hits as the next in line –  the post with the various C64 power supplies (link).

Also a great big thanks to those of you who have taken the time to comment on the posts or even written me an email. Always feel free to drop me a line and I’ll try to answer to the best of my ablility!

So, what to expect from the upcoming year here on breadbox64.com? I have quite a few mods and projects in the pipeline for future posts: Very soon a guide on how to build your own JAMMA based arcade machine will be posted. Several new C64 repair logs are under contruction. Some new keyboards for my two C64 Reloaded boards (link) and Kickstarter cases (link) are in the process of being made. I am also working on several hardware and game reviews. And of course a Commodore 64 ‘Mod of the Year 2016’ to surpass last year’s mod (link) – this year’s mod is all about lighting up your C64, soldering and hacking the C64 KERNAL…

I hope you enjoy reading the posts as much as I did making them! Let’s see if I can reach post #128 within the next year 🙂 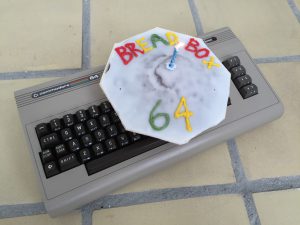