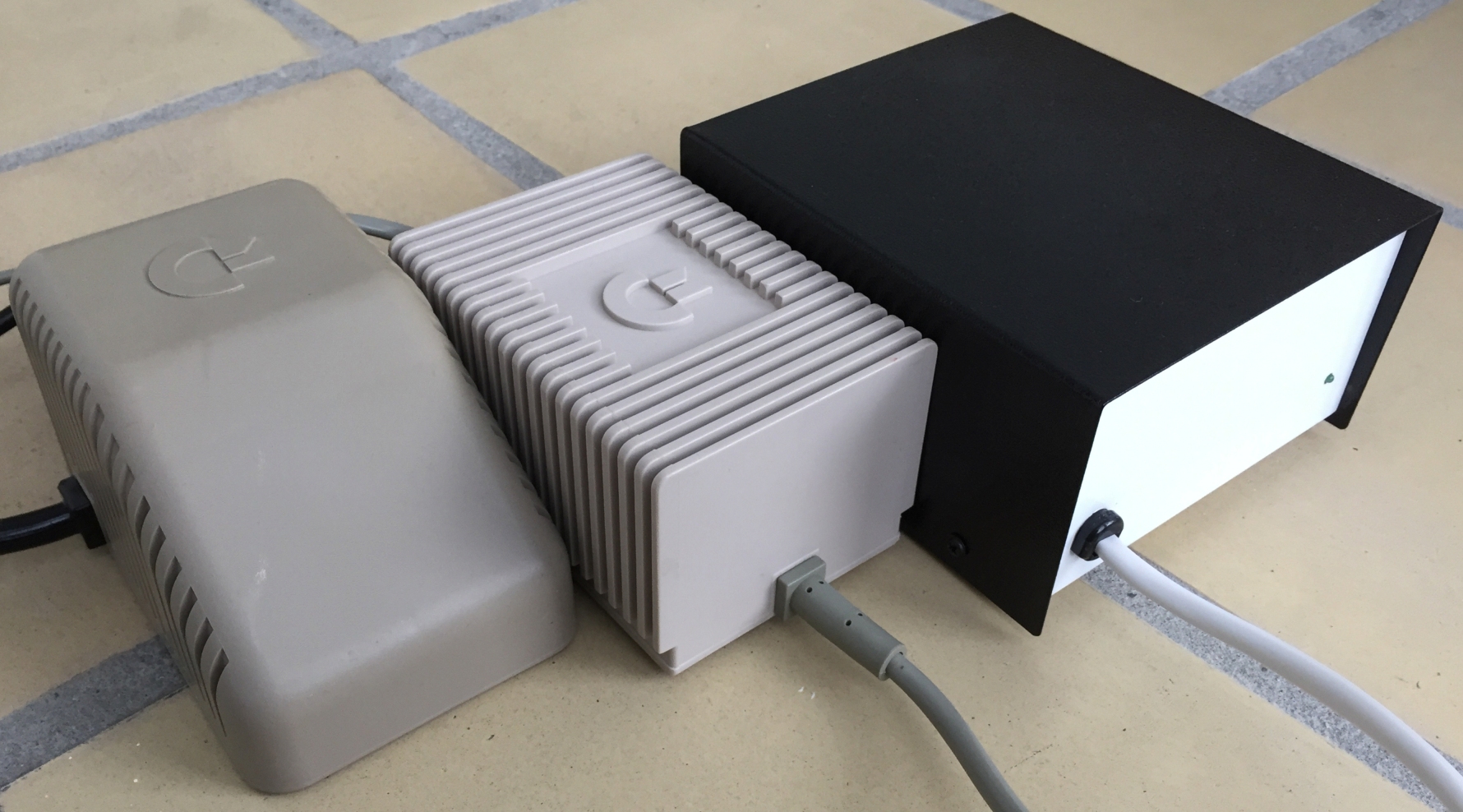 Commodore produced a fair amount of different looking power supply units (PSU) for the Commodore 64 home computer. I have collected some of the most common versions from the European market in this post to show some of the differences between them. All brown/greyish PSUs were made for the Breadbox and can supply 1.0A @ 9V AC and 1.5A @ 5V DC, while the white PSUs for the Commodore64C and C64 Games System provides 1.0A @ 9V AC and 1.7A @ 5V DC. At the bottom of the post is a more modern C64 PSU made by Ray Carlsen with a build-in computer saver (more on that later).

This particular PSU uses a T160mA fuse. It has no power switch on the rear side. The fuse plate is rectangular shaped.

This particular PSU uses a T160mA fuse. It has no power switch on the rear side. The fuse plate is square shaped.

This particular PSU uses a T200mA fuse and a T1000mA fuse. It has a power switch on the rear side. I like having the option of turning the PSU off whenever I do a repair job to make sure no power is still flowing into the electronics when I remove IC’s for testing/repairing. The fuse plate is rectangular shaped.

This particular PSU is from Columbia (thanks José!). The PSU seems to be repairable. It has a power switch and a LED on the front and is by far the most bulky PSU I have seen from Commodore for the C64.

This particular PSU has no fuse or a power switch on the rear side.

This particular PSU uses a T200mA fuse. It has no power switch on the rear side.

This particular PSU is black and is made in England. It has no power switch on the rear side.

The above PSUs use a linear design consisting of a transformer, a rectifier, filter capacitors and a regulator for the 5V DC source. The 9V AC comes straight out of a transformer. This linear design is simple and reliable but it creates a lot of heat which will eventually destroy the PSU. Some of the PSUs can be repaired while others must be replaced. One of the ways a PSU can fail is from a shorted internal 5V regulator. That fault puts excessive voltage into the computer and will most likely burn off IC’s (like RAM ICs) and kill the machine before being noticed.

Ray Carlsen have come up with a solution in form of an over-voltage protection unit to prevent damage to the Commodore 64 computer due to a failing PSU. It is called a  Computer Saver and is essentially a fast-acting electronic circuit breaker. It functions by quickly cutting off the 5V supply line to the computer if  the voltage exceeds approximately 5.4V. As a stand alone cable version it is inserted between the PSU and the power plug of the Commodore 64. Whenever there is a fault, the red diode flashes/makes a clicking sound and the PSU can be removed before damaging the computer. I always use it when connected to an original PSU regardless of its previous working state. Just because the PSU worked before, does not necessarily mean it will keep on working! The Computer Saver has already saved my precious machines from at least 4 broken PSUs which came with a supposedly working machine. Do not believe that a PSU is working just because the power LED lights up when turning on a Commodore 64! The price of the Computer Saver is far less than the price of a replacement MOS8580 SID chip…

Ray Carlsen also makes universal Commodore PSUs with a build-in Computer Savers. His PSUs delivers 9V AC @ 1A and 5V DC  @ 5A which is more than enough to run a Commodore 64 with a RAM Expansion Units (REU) or a SuperCPU attached to it. It features large heat sinks to make it run cool in any environment, a tight regulation from no load (computer off) to full  load (5 amps maximum) and has automatic shutdown protection if overloaded from a downstream short circuit. The electronic components are assembled in a sturdy metal case and I had Ray install an IEC power connector so I could use my own mains cable for the European 230V @ 50Hz mains voltage. My custom made version only has a power connector for the C64 while the standard version comes with a C128 connector as well. This PSU is one of the nicest peripherals I have for my Breadboxes!

This is the inside of the Ray Carlsen PSU. Everything is kept nice and neat!

The Polish company Electroware (link) makes PSU’s for the Commodore 64. A review of their Commodore 64 power supplies can be found here (link).

The power supply yields 5VDC@4A and 9VAC@1.11A which should provide more than enough power to most users. Its voltage over protection circuit is based on a crowbar protection circuit and a TVS diode. The circuit is set to trigger around 5.2-5.3V. With the PTC fuse, filter and cable voltage drop, no voltages higher than about 5.1V should ever reach the Commodore 64 main board.

The power supply yields 5VDC@3A and 9VAC@1.11A. The C64 PSU PRO model also comes with an extra outlet socket (12VDC@0.6A and 5VDC@1.0A) for powering a 1541-II and 1581 diskette drives. The PSU also has an over voltage protection circuit to ensure that the voltage levels will always be kept within safe margins. At the bottom of the case is a potentiometer which can be used to tweak the 5VDC line to mach the exact voltage needed by the hardware.