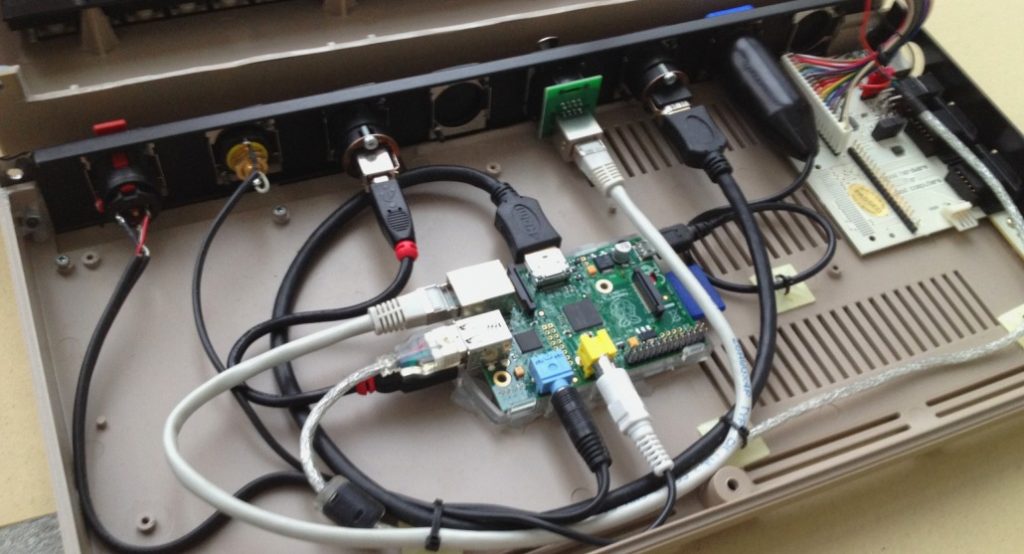 For some reason I had a Commodore 64 breadbox case, a RaspberryPi and a Keyrah PCB filling up my spares box. I really can’t say why my spares box is so well equipped, but this is how I got on the ‘C64 RaspberryPi mod’ wave. The RasPi is basically a small 45 $ computer with build-in HDMI, USB-ports, sound, network and some other stuff for hardware add-ons. To make the mod I basically assembled all the cables, installed the appropriate software and made a small arcade machine of the left over pieces from my spares box. This is how the machine ended up looking on the inside.

The first thing I did was to get the old Commodore 64 keyboard assembled with a Keyrah in order to have it work as a modern USB PC keyboard. The Keyrah PCB allows connection of classic computer keyboards (like the Commodore 64) to modern computers via USB. It also supports digital joysticks by translating the joystick events to key strokes. It can be bought from Individual Computers. I made the USB connection internally in order to connect it to the RasPi.

As I wanted the machine to visually resemble the original Breadbox as much as possible, all wire connections from the RasPi were transferred to plugs from Neutrik which could then be reached from the outside of the case. I tried to make verything as nice and tidy as possible… I had to trim out some of the case material in order to have the rack mount fit.

The RasPi runs on 5V DC. Instead of using an ugly modern ‘wall wart’ power supply I used an original Commodore PSU by simply removing the 9V AC line and connect the 5V DC to the power plug from Neutrik. These images show the blue power connector and the side of the machine with the Keyrah installed.

Data is stored on a standard SD card. First I installed a standard version of Raspbian Wheezy to test if everything worked as expected. With this software it is basically a rather slow Linux PC.

However, I wanted the system to automatically load into the ‘arcade mode’ as I did not intend to use it for anything else than gaming. A version of ChameleonPi was installed which has a lot of different emulators already installed and ready to go. I’ve made a small video of how the machine works in action with the game of Commando:

As the RasPi has a HDMI connection, it is really easy to hook it up to the flat screen TV in the living room.