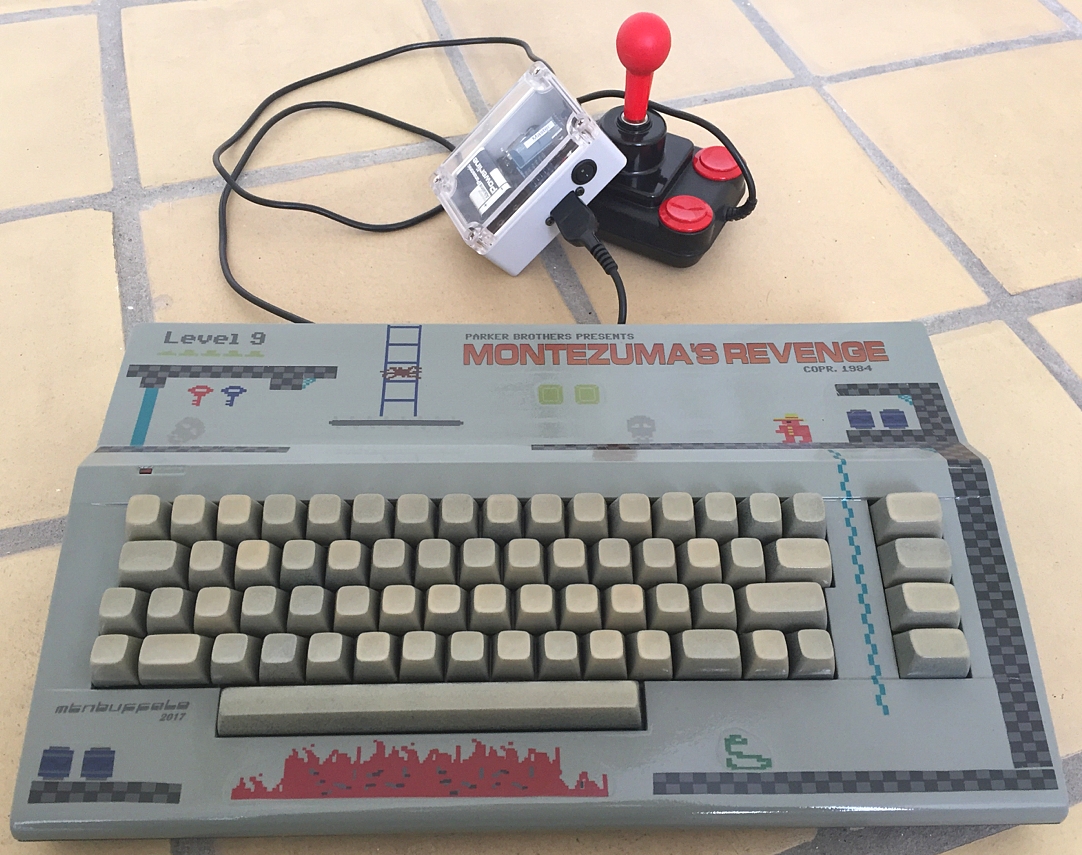 Another year has passed and once again it is time to present this year’s Commodore 64 mod of the year! In 2015 it was a painted breadbox that was modified with potentiometers and a hardware solution for playing SID tunes in stereo (link). In 2016 a transparent Kickstarter case with flashing LED’s was used along with an LCD display and the entire motherboard was modified with ZIF sockets (link). The Mod of the Year 2017 is a tribute to the C64 game Montezuma’s Revenge (link). The case is decorated with graphics from the game while the keys are painted in greyish colors to match the overall theme. When turning on the machine the colors of the Basic screen has been modified along with the text to let the user know that this is a dedicated Montezuma’s Revenge machine! The game is of course installed on an internal SD2IEC and pressing SHIFT + RUN/STOP will load the game automatically. Gaming can be done wirelessly on the couch 15 feet away as the joystick connection is wireless. The Mod of the year 2017 is a compilation of several previously described mods as well as a few new ones. I’ve worked on the machine for quite some time and this is the complete list of what has been done to it.

All the electronics have been placed in a miscolored Commodore 64 C case with a green short board (Assy 250469 Rev A.). This mod was all about making an Montezuma’s Revenge themed case that would be dedicated to playing just that game. More info on the case mod can be found here (link).

There are so many ways to load Commodore 64 games other than having to fiddle around with old 5.25″ floppies. One of these devices is the SD2IEC which is a mass storage solution that uses a SD card for data storage (e.g. games and programs) and interfaces with the IEC bus of the Commodore 64. It does not emulate the 1541 diskette drive completely like the expensive 1541 Ultimate II does (link), but it reads quite a few .d64 and .prg files and it supports JiffyDOS natively (link)! For this mod I used the smallest device I could find – the SD2IEC Mini from 16×8 Digital Retrovation (link). All wires have been placed internally to make the mod as clean as possible. Don’t want to cut holes in that nice case, right? A review of the device can be found here (link).

To swap between kernals (CBM Kernal & JiffyDOS), the original CBM Kernal IC has been replaced by a small PCB with both the original CBM Kernal and JiffyDOS. Pressing the RESTORE button during power up, the machine will boot into the standard CBM Kernal. If nothing is pressed during power up, the machine boots into JiffyDOS. I modified the Kernal to customize the colors and text of the JiffyDOS screen. The changes were burned onto a 27C512 EPROM. The entire mod and how to modify the C64 Kernals can be found here (link). Below are the solder spots for the switchless Kernal unit.

The Kernal has custom colors and text to match the Montezuma’s Revenge theme. Turning the machine on will make it boot directly into JiffyDOS. Pressing SHIFT + RUN/STOP will load the first program on the SD card which is… Yes, Montezuma’s Revenge!

The JoyFi is a neat solution for making your joysticks go wireless using original 9-pin joysticks on the Atari, Amiga and Commodore 64 as descirbed here (link). The JoyFi is made by RiBIT (link) and  consists of two PCB’s that are connected to the joysticks (Master PCB) and the Commodore 64 (Slave PCB). The master part is powered using a 9V battery while the slave part is powered by the 5V line of the joysticks ports. The wireless connection is based on a Bluetooth connection and after booting up the machine, the connection is made within seconds. The parts comes unprotected so I decided to put the slave parts inside the c64 case and make a box for the master parts.

The slave parts placed inside the C64 case. I had to drill a hole to the larger PCB to put a screw through it. That particular area is just ‘ground’, so nothing should break (except for the warranty!). To connect the joystick ports to the motherboard of the C64 I used two male 9-pin plugs and a heap of wire…

The cables were then connected to the Slave part of the JoyFi. The normal external joystick ports still work if a mouse or paddles should be connected to the machine (the JoyFi does not support these devices yet!).

The master part of the JoyFi is for the joysticks. I used a small case for installing the hardware. I installed a little rocker switch in order to save on battery power when not in use.

A red LED lights up when the device is turned on.

All capacitors were replaced with new ones as described here (link). This should make them work for another 30 years without drying out…

The 3D printed keyboard mounts look a little nicer than the stock metal ones… More images of the mounts can be found here (link).

An orange LED was made to go with the overall theme of the machine as described here (link).

The motherboard also had a fresh new power switch installed to keep it going for years to come. The old switches may go bad after a certain number of operations.


The Machine in Action

A little video showing the Mod of the Year in action.

And here it is, Mod of the Year 2017 with the wireless joystick mod inside a small case ready to do some Montezumas Revenge gaming!