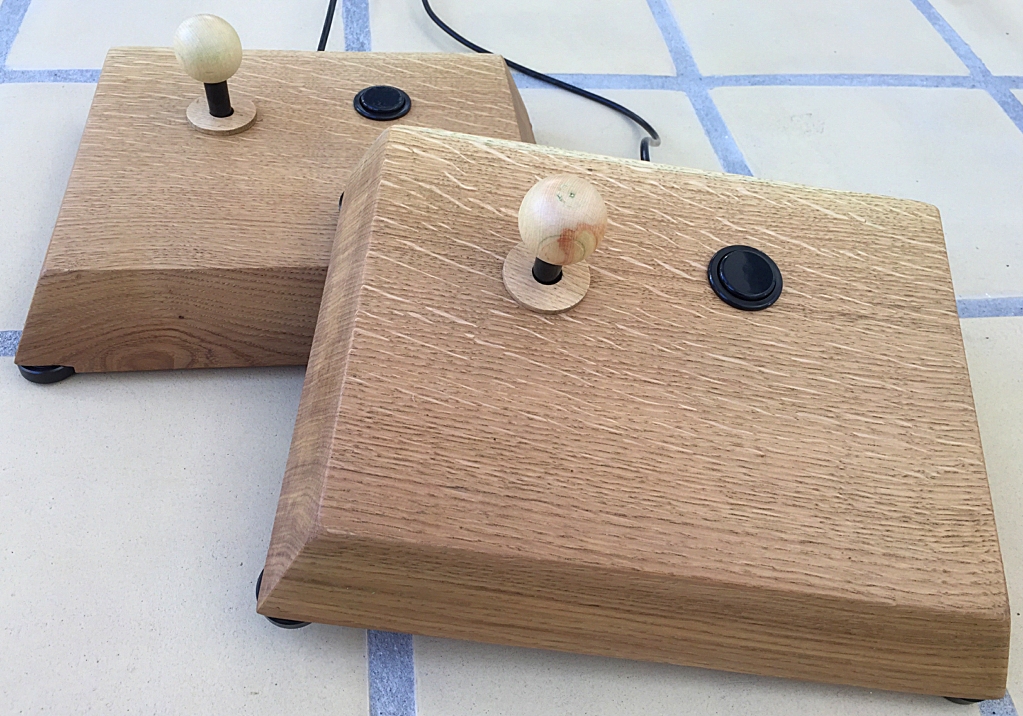 I’m not proud of it but I’ve cheated! It’s a horrible thing to do but I simply didn’t have the patience not to… The initial idea was to grab my kick-a$$ Stihl chainsaw, go fell a suitable oak tree, use my mobile sawmill to make some thick two inch planks, make them dry in the backyard before turning them into new joysticks. It would have been pretty cool to create some new  Commodore 64 joysticks from oak wood that I’ve felled myself in a local forest. However, oak planks of that thickness could take more than a year to dry and there is no guarantee that it would not warp or split during the drying process. So I cheated and went to the local sawmill and bought some pre-dried oak for my next Commodore 64 joystick project…

The original joysticks for the Commodore 64 were both sturdy and precise for their time (link). However, if even more stealth-like precision is needed, there are alternatives that may surpass the old plastic C64 joysticks. At least in my opinion… As I really enjoy playing platform games like Montezuma’s Revenge (link), I wanted to build new joysticks that were both precise, sturdy and not looking like something I could just go buy at the local games shop. I have previously build a few fight sticks from wood (link, link, link) but all those sticks were made for modern game consoles or MAME. This time I wanted to build two Commodore 64 joysticks from a solid oak plank, add some Sanwa JLF joysticks, some Seimitsu PS-14-G 30mm snap-in buttons, some black aluminum feet, and finish it all up with custom wooden balltops and dust washers.

This is how the joysticks ended up looking. The rest of the story can be found below…

Making room for the Joysticks and Buttons

First I made holes for the buttons using a 30 mm forstner drill bit. Next up was cutting the big hole for the joysticks. I made a template for my router to make the cutting easier and more precise. To place the Sanwas joysticks as close to the top of the joystick as possible, I used Sanwa JLF-P-1 mounting plates. The mounting plates were fastened to the internals of the joystick by using M6 threaded insert bushings. This approach makes fastening of the joystick invisible from the outside… The button shown in the fourth picture is a Seimitsu PS-14 GN screw-in button and was later exchanged with Seimitsu PS-14-G 30mm snap-in buttons.

I used 35 mm wooden balls to make some nice ball tops. The holes were made with a bench drill and some M6 threaded insert bushings were used to fasten it to the joystick.

I used these black aluminum feet to make a nice finish. They are made for turntables or other hi-fi equipment but also seems applicable to wodden joysticks…

Next up was the creation of oak dust washers. These can be bought online, but are silly expensive so I just made my own…

I used some 9 pin extender cables for connecting the joysticks and fire buttons. The fire button hole did not penetrate the bottom of the joystick. In order to connect the button, a small hole was drilled from the main joystick hole to the fire botton hole. The Sanwa JLF came with a harness which made it pretty easy to connect the wires correctly. This is what it ended up looking after everything had been shrink wrapped…

I then oiled up the joystick to withstand the sweaty palms and fingers during gameplay! Three layers of oil made a nice finish… I used oil that is made for tables. The very last thing that needed done was the plexiglass/acrylic boards to close the internals of the joysticks. And of course the burning mark on the bottom of the joystick stating that the joysticks were ‘Handmade by MtnBuffalo’.

This is how the joysticks ended up looking after quite a few hours in the basement..