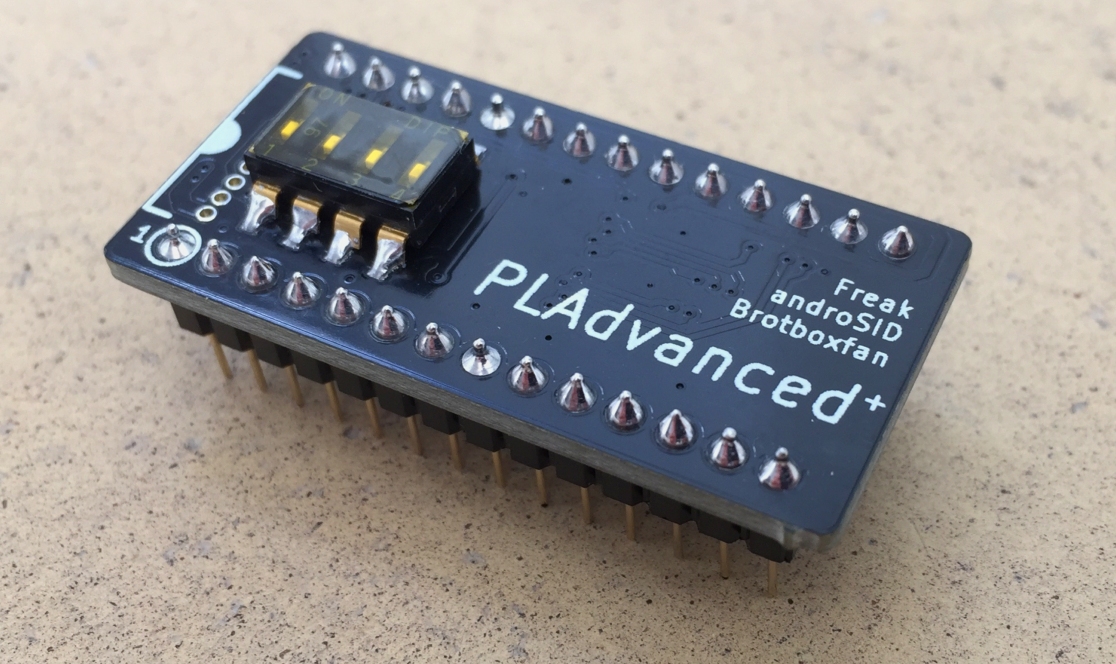 This may come as a shock to some, but the sad news is that the old chips inside a Commodore 64 will eventually fail!! Most often the chips will simply die due to old age or other external factors like a faulty power supply. When a chip fail, the most dreaded fault is the black screen in which the machine simply goes black when it is turned on. If the power supply is faulty, the RAM’s are always a good place to start as these will fry at even small voltage increases. However, on the older long boards (e.g. Assy 250407, 250425, 250466 etc.), the Programmed Logic Array (PLA) chip located at position U17 is the one that most often break due to age. Based on different input signals, the PLA creates chip select signals and controls which chip is to be connected to the data bus. Thus, the PLA is responsible for the implementation of the memory map of the Commodore 64. If the PLA is broken, the MPU (the C64 main CPU) and the VIC-II graphics chips cannot access the correct memory and I/O devices anymore. The result is the dreaded black screen!

Changing a broken PLA can be done by simply using another 30+ year old PLA chip from a donor machine. Depending on the amount of hours the replacement PLA has been used, this chip will also eventually fail. In this context, new replacement PLA’s have been produced in order to surpass the failure prone original version of the chip. Two approaches are used when making new PLA’s. The first is based on CPLD (complex programmable logic device) technology while the other is EPROM (erasable programmable read-only memory) based. A more thorough review of these devices (and how to make your own PLA!) can be found here (link).

I just received a newly developed PLA for review from Germany based on a CPLD chip. This version is called the PLAdvanced+ (link, link) and differs from all the other replacement PLA’s I havee seen so far. The device has 28 pins (like the original PLA) and is made from a black PCB with golden pins. The build is nicely done and it looks like a product that will last for an eternity. The PLAdvanced+ looks like this:

The PLAdvanced+ is made by a German trio – Freak, androSID and Brotboxfan from Forum64.de. The PLAdvanced+ was created because the group needed a single chip that can be used for the 1551 Floppy drive, the CBM P500 and other retro projects as well. After about two months of development, the PLAdvanced+ was made! The device is based on the original Signetics 82S100 chip that was made back in 1975 and used in the early motherboard versions of the Commodore 64. The uniqueness of the PLAdvanced+ is that it contains nine different PLA’s in one! Thus, the device can be used to replace the PLA’s  in the following devices: Commodore 64 (and SX64), 1551 floppy drives, the CBM 6×0, CBM7xo, Commodore 16 (and C116 & plus/4), the CBM 8296 UE5, the CBM 8296 UE6, the P500 U78 and the P500 U88 (and U78).

The support for all these different Commodore machines will come in very handy when doing repairs. Scavenging for old chips is a full time job for anyone who repairs old Commodore gear. And when repair parts are found they tend to be quite expensive. This version of the PLA may ease the work a little as only one chip is needed to swap between hardware. Nice!

Changing the functionality of the device is done by a four pin DIP switch placed on top of it. The ESD bag that it came in has the list of the different configurations and the information can also be found on the wiki of the device (link):

The DIP switch is located on the top side of the device so the chip type can easily be adjusted.

The PLAdvanced+ is compatible with all versions of the Commodore 64 long boards as well as the C64 Reloaded boards (link).  The device should also be compatible with all cartridges including the Epyx FastLoad and Super Zaxxon, which some of the EPROM based solutions fails to run. In this context, the cartridge version of Super Zaxxon uses a flip-flop to toggle access between the upper and lower half of one of its two ROMs. This causes it to be very sensitive to any timing problem a PLA might have! However, I do not have either of these cartridges so I did not test this.

It should be noted that the newer short boards (e.g. Assy 250469 boards) use a different type of PLA and therefore is incompatible with the PLAdvanced+.

My current Commodore machine park only contains different versions of the Commodore 64. I therefore only tested the device in those machines. However, none of my tests came out negative regardless of what C64 motherboard I put it into, including the C64 Reloaded. Here are some image of the PLAdvanced+ installed in a C64 Reloaded and in a heavily modified Assy 250425 long board.

So the big question is whether this device is better than the rest of the available third party PLA’s available out there? Well, if you primarily fix broken Commodore 64’s like I do, then the large functionality of the device may be a little overkill. But if you are a real Commodore aficionados and also repair the more rare hardware from Commodore, this is definately a device that should be a part of your tool box. Nevertheless, being a true Commodore horder, I just had to have the PLAdvanced+ as part of my collection of PLA’s…

The device comes fully assembled or as a kit for those who want to tinker with the hardware themselves. The PLAdvanced+ is available from restore-store.de (link) and polyplay.xyz (link) at around 23 Euros + shipping from Germany while the simpler versions cost around 15-16 Euros + shipping. So if you do repair’s (or plan to do repair’s) of some of the more rare Commodore hardware, the PLAdvanced+ is definately a device to consider. However, if you just want a cheap PLA replacment chip for a black screen C64, then I would go with the cheaper version of the device 🙂

As a final comment, I really really like the idea of modern Commodore 64 replacement parts that can be used to across several old parts. Like the multirom IC which holds the BASIC, CHARACTER and KERNAL ROMs (link) or the switchless Kernal PCB that holds both JiffyDOS and the CBM Kernal (link). I hope that more people will pick up the idea of doing this and maybe the future will bring a 40 pin replacement device that will hold the MPU, the CIA and the VIC-II functionality in a single device – how sweet would that be?