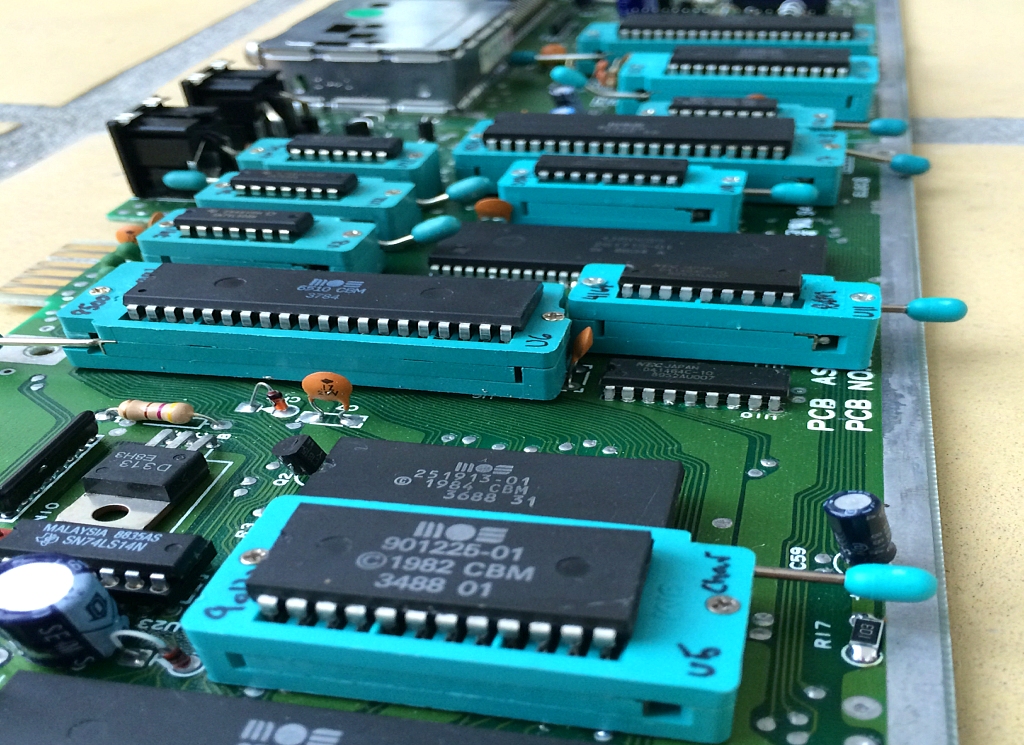 Repairing broken Commodore 64’s is usually a matter of qualified guesswork and quite often substitution of chips is the only practical way to diagnose a fault. At least that is the approach I’m using when trying to resurrect broken machines. The challenge with this method is that most of the old C64 chips are in short supply (and insanely expensive to get online!). I therefore test possible broken chips in a machine that is known to be working. The problem with this approach is that sockets have to be installed throughout the test board to enable testing of all the different chips. In this context, ZIF (Zero Insertion Force) sockets may be used instead of standard sockets to reduce the risk of bending the pins when inserting and extracting chips. ZIF sockets function by moving a lever on the side of the socket which in turn pushes the socket contacts apart. This way an IC can be inserted with very little force and when the lever is moved back, the contacts close and grip the pins of the IC. Thus, insertion and removal of IC’s are effortless and reduces the risk of bending the pins.

In this mod I wanted to mount ZIF sockets to all the different chips on a Commodore 64 Version E (short board) motherboard for easy chip testing (link). Almost every chip on the board had a ZIF socket installed. Only two chips had a leaf socket installed due to space issues on the board. If two identical chips were present (like the CIA and RAM chips), only one chip had a new socket installed. To do the mod I ordered a stack of ZIF sockets on Ebay. I got green ZIF sockets from 3M and TFXTOOL in size 7.62 mm and 15.24 mm depending on the size of the chips they should accomodate.

As evident from the picture above, ZIF sockets are bulky in design and not directly swappable on any Commodore 64 motherboard. Because of this, the mod took me quite a while as some ZIF sockets had to be turned 180° in order to fit, others had to have their levers bend a little and some even needed a little trimming to make them fit. The latter was pretty easy to do with the aid of my good old grinder!

The lever on the SID (MOS 8580) chip ZIF socket had to be bend a little to stay clear of a transister. The 1 kΩ resistor at R12 was exchanged with a SMD (Surface Mount Device) type resistor to make room for the lever.

The VIC-II (MOS 8565) at U7 could pretty much be mounted without moving anything. However, to fit the socket for the 8701 clock generator at U20, the Ferrite Bead at FB1 and the capacitor at C35 both had to be moved to the backside of the board.

The RAM chip at U11 and the MPU (MOS 8500) at U6 were also swapped (a MOS 6510 IC was temporarily used for testing the board as I did not have a working MOS 8500 at the time of the mod). The sockets had to be trimmed a little to fit. The capacitor at C48, located in front of the RAM chip, had to moved to the backside of the motherboard.

These three smaller chips  (U3, U21, U22) also had ZIF sockets installed. The U3 and U22 levers had to be bend a little to stay clear of other components. The 4066 chips at U18 and U21 are identical. A ZIF socket was therefore only installed at U21 as there is more room on the board at this location.

This board now serves as a my chip test board during repairs of broken Commodore 64 short boards.

9 comments on “The ZIF Socket Mod”