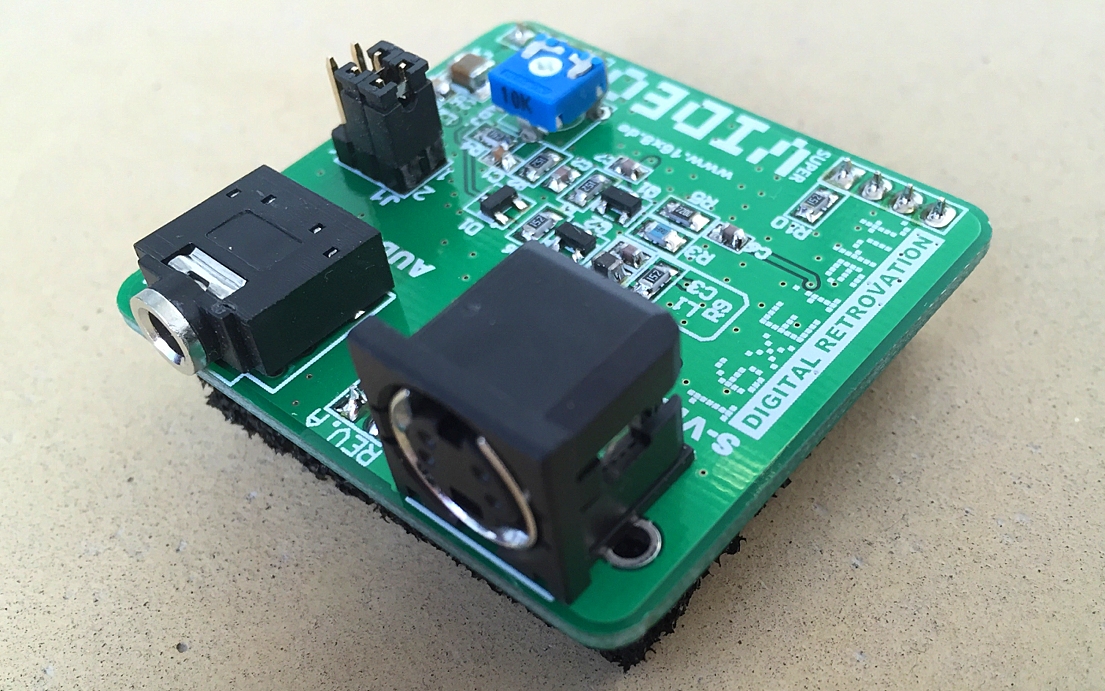 The video signals coming from the Commodore 64 may be challenged by numerous factors including the version of VIC-II graphics chip being used and the applied display technology (e.g. LCD, LED, Plasma or CRT). The problems are easily recognized in the form of vertical lines (banding artifacts) or as a checkered pattern spanning across most of the screen, depending on the monitor signal being used (Composite or S-video). An easy improvement strategy is the addition of the LumaFix64 device as described here (link). In this context, a more radical approach is the removal/replacement of the entire Commodore 64 RF modulator box to refine the quality of the S-video signal (which is generally viewed as the best video output). As the RF box holds the circuitry necessary for S-video output (luminance and chrominance), it cannot be removed without some kind of replacement circuit. Furthermore, removal of the RF box may improve the S-video signal but will remove the aerial connection as well as the composite video signal. In my opinion, that is a sacrifice I can live with as long as it improves the S-video quality.

The Super VIDEO Board:

As described above, the mod requires a substitute circuit for the RF box and 16×8 Digital Retrovation (link) has made a neat solution that is ‘plug-n-solder’. Their device is called a Super VIDEO board and has a S-video output connector and a 3.5 mm mini jack output plug for the sound. It only fits the Commodore 64 Version E short boards (Assy 250469, link), but should also fit the Commodore 128’s. The device costs 21$ without shipping from Germany and  it looks like this:

The two pins in the front are ground and can be used to adjust the mouting height of the Super VIDEO board. The S-video and 3.5 mm mini jack sound connectors can easily be reached using the holes in the Commodore 64C cases. No need for drilling new holes!

The mod was applied to my ZIF socket modded Assy 250469 Rev. 4 short board motherboard (link)

The stock Commodore 64C RF modulator box was removed  using my gas soldering iron as this device can dissipate tons of heat and makes de-soldering easy. I also used a heat-gun to make the process as easy as possible. A total of eight pins had to be de-soldered to remove the original RF box.

The RF replacement circuit installed and ready to be tested. The blue potentiometer can be used to tweak the intensity of the colors. Before soldering the front two pins, the level af the board was double checked to make sure that the plugs could reached through the case openings.

A S-video cable was found in the drawer…

Rrrrggghhhh…total disappointment!!!! I then removed the Super VIDEO board and re-soldered the original RF modulator box. The machine was working again, meaning that the device I purchased was faulty! After a single e-mail to 16×8 Digital Retrovation, they sent me a replacement PCB and this time it worked!

Before the mod I also shot some pictures of the image quality on my 42 inch plasma TV in the living room. As I knew that the S-video related artifacts would be very pronounced on this TV set I also tested it with the LumaFix64. The results, especially when using the LumaFix64, were acceptable as should be evident from these images taken before the RF box mod:

After replacement of the RF modulator box, the images were quite affected by vertical stripes and checkered patterns. I found that the images from the Super VIDEO board were worse in direct comparison to the images from before the mod. Adding the Lumafix64 improved things a little, but kinda goes against the whole idea of just doing the RF box mod for improving the S-video image quality. As evident from these pictures, the Lumafix64 cleared up the image a little but I was not able to remove the artifacts completely.

Just for the fun of it, I also tested the S-video signal from the original 8 pin DIN connector with and without the Lumafix64 on the plasma screen (while the Super VIDEO board was still installed). Using this output yielded a better picture than the signal from the new RF box! Adding the Lumafix64 improved the image even further and superseded the image obtained from the RF box. However, the colors changed to a darker/greyish color which I was not able to remove even with the LumaFix64 installed.

Is the RF box mod worth the hassle of soldering? The short answer is yes to CRTs and no to flatscreens… If you primarily use a quality CRT television like me, always use the S-video signal and feel comfortable with a soldering iron, the C64C RF box mod will improve the image quality slightly. That being said, I find the improvement in image quality to be so small that I will only apply it in my primary machine. I will therefore not start replacing RF boxes in all of my machines. The 3.5mm mini jack provides an easy way to transfer the sound to a lager sound system and the sound quality should be better in comparison to the sound coming from the stock 8 pin DIN video connector. As the sound produced by my B&O CRT TV is really great, this option is not a turning point for me.

If your primary display is of a more modern breed (e.g. LED, LCD, Plasma) you will most likely experience a greater improvement in image quality with a LumaFix64 than with the Super VIDEO board from 16×8 Digital Retrovation. Using the LumaFix64 will also save you some soldering… Based on my tests, the device did not improve the image quality on my plasma TV. Other TV technologies (e.g. LED) may behave differently to the RF box mod, I just have no way of testing this. It should also be mentioned that this mod was carried out on a Commodore 64 short board (which the device was created for). More positive results are to be expected (according to several online C64 forums) using older motherboards with older revision VIC-II chips. However, this requires a different hardware solution. The device may also perform better in the Commodore 128’s, but again, I have no way of testing it in that hardware either.

As stated above, the mod was carried out using a short board motherboard (Assy 250469). The VIC-II chips in these machines (MOS 8565) are, in my experience, notorious for their poor image quality. Thus, if image quality is a top priority, try to get a Commodore 64 with a long board and a MOS 6569R5 VIC-II graphic’s chip. This specific chip holds the best obtainable image quality on any Commodore 64 I have seen.