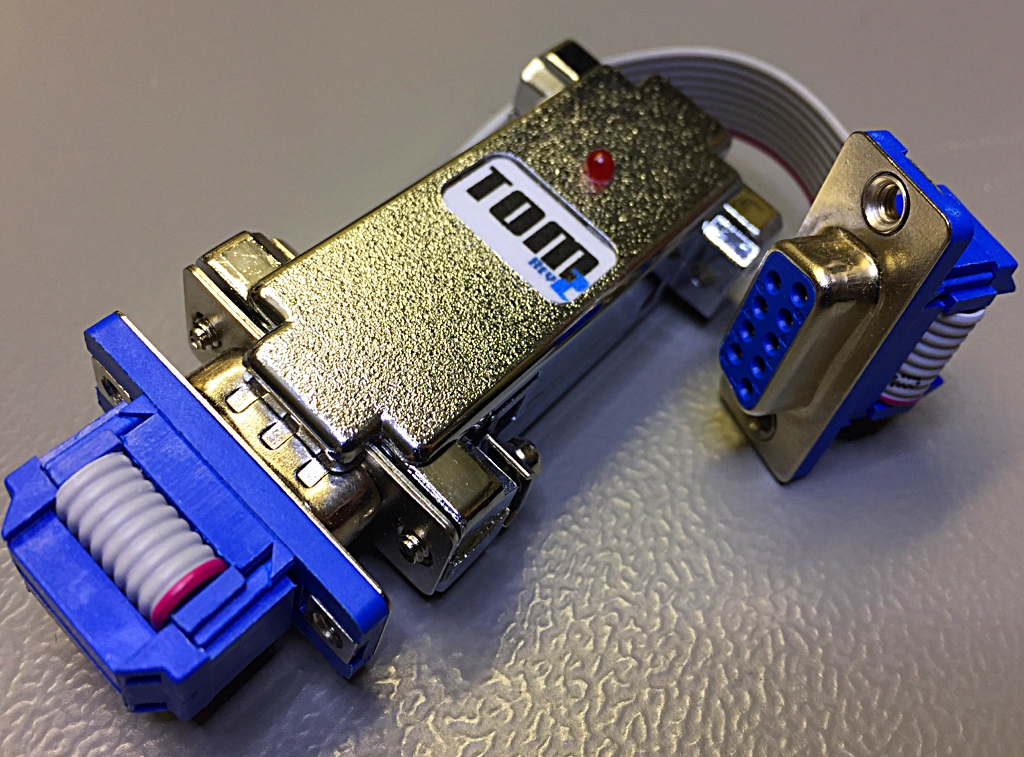 Getting tired of using your old Competition Pro joystick with the sloppy spring and the far-from-always-working fire buttons? If so, you could clean and possibly change the worn out parts of the joystick as described here (link) or you could look for a replacement joystick. However, if you are considering using modern-day peripherals (e.g. mouse, gamepad or trackball) for your Commodore 64 gaming needs, this post may be of interest to you…

Polish based electronica4u (link) makes a cornucopia of different retro computer adapters to accommodate various input devices. The adapters support most Amigas, the Atari ST, the Atari Falcon, Atari TT and of special interest here – the Commodore 64 (and C128). The one being tested here is the TOM Rev2 (or simply TOM2) adapter which allows connecting peripherals via USB including HID-compatible devices like mice, joysticks, joypads or keyboards. It is even possible to connect multiple devices to the TOM2 adapter with the use of a wireless USB receiver (e.g. mouse and keyboard). A list of known supported devices can be found here (link).

The TOM2 adapter hardware is neatly placed inside a sturdy metal case with a 9-pin D-sub connector in one end and a female USB A plug in the other end. A small adapter ribbon cable is needed for using the device with the Commodore 64.

Connecting it to the Commodore 64

The TOM2 adapter is connected to the Commodore 64 using one of the joystick ports. The connection should be done prior to turning on the machine to avoid causing damage to the precious joystick ports of the C64. However, connecting USB peripherals can be done with the C64 turned on (hot-plug mode). Connecting and disconnecting can be done multiple times if needed. During its operation, a small LED on top of the device shows the current status.

Before testing the TOM2, I tried upgrading the firmware using the e4you Updater  firmware which can be found here (link). The TOM2 is connected to a Windows PC using a male USB A/A cable after which the red LED starts to flash. The adapter is automatically found by the sofware and by pressing the ‘Connect’ button the firmware update should start. However, I never managed to get this part to work as the server seemed to be down. I even tried contacting the manufacturer through the provided email from their website but it kept bouncing. Nevertheless, the software updater said that my device have software version 5 so it should be one of the newer software revisions.

Before testing the TOM2 adapter, it had to be set to Commodore 64/128 mode. This is done by connecting the device to C64 Port 1 with an USB mouse. Within one second of turning on the C64, the middle mouse button has to be pressed and then the left mouse button has to be pressed quickly 5-6 times. If done correctly, the LED will turn off for a second and then flash 3 times to indicate that it has been set to C64 mode. Then the middle mouse button can be released and the C64 can be powered off. And that’s it!

I tested the device using a number of peripherals. First I tested the TOM Rev2 with my gamepads. The LED on the device dimms twice every two seconds when a compatible joystick/joypad is connected. My good old Logitech WingMan Extreme joypad worked without any issues. However, my Xbox 360 USB cabled game controller made the LED flash rapidly as an indication of the gamepad being incompatible with the TOM2… This also held truth for my wireless SpeedLink Torid gamepad. According to electronica4u’s website, the adapter should support PSX/PS2 gamepads with and external chip adapter. As I don’t own this particular gamepad, I did not get the opportunity to test this.

Next up was testing the device with a keyboard. I used an old USB keyboard that made the LED dimm three times during each two second period. The keyboard is used as a joystick replacement by using the WASD keys for movement and O and P keys for fire (or left and right button in mouse emulation mode). The TOM2 allows two keyboard modes (mouse and joystick) by pressing the ‘1’ and ‘2’ numeric key respectively. Again everything worked as it was supposed to.

The TOM Rev2 also supports wireless mouse and keyboard sets simulataneiously. I tried connecting my Logitech K270 keyboard and logitech Performance MX mouse with a Logitech Unifying receiver. However, the TOM2 does not support these devices.

Last up was testing it with a few mice. To do this I inserted my Final Cart III along with an old USB cabled mouse. The LED dimms every two seconds when a compatible mouse is inserted. Again it worked withou issues. I also tried using an older wireless mouse and this didn’t give rise to any issues either.

I’ve been using the TOM Rev2 for a few weeks and I cannot find much negative to say about it. It comes in a sturdy metal case. It does exactly what the manufacturer promised. It’s easy to program and after programming it simply works as intended. I don’t ever use a mouse (even though some games support mice, e.g. Arkanoid-Revenge of DOH) when using my Commodore 64s. In most cases I would simply use a paddle instead. So this feature will not be used much in my setup.

The keyboard support is also something I would not use much. The idea of hooking up an external keyboard for playing games with the keys sounds like something I would do in VICE if I did not have any original hardware (C64, joystick etc.). Other people may find uses that I have not thought of, but for me I don’t think I would ever use an external keyboard for playing games on my original Commodore 64 hardware…

In my opinion, where the TOM2 really shines is when hooking it up to modern day joysticks/joypads. This functionality is what I really like and in my opinion the main reason for purchasing it. I found myself playing Montezuma’s Revenge (link) for hours without any delays or other sources of irritation. The device simply works! Some gamepads abviously isn’t supported, but those that are should be a nice addition to any C64 gamer’s setup!

The device can be found on Ebay and costs 31.50 USD + shipping from Poland.

NOTE: This article has also been been published in Europe’s #1 C64 scene disk magazine – Attitude #20  by TRIAD (link, link).

7 comments on “The TOM Rev2 Review”