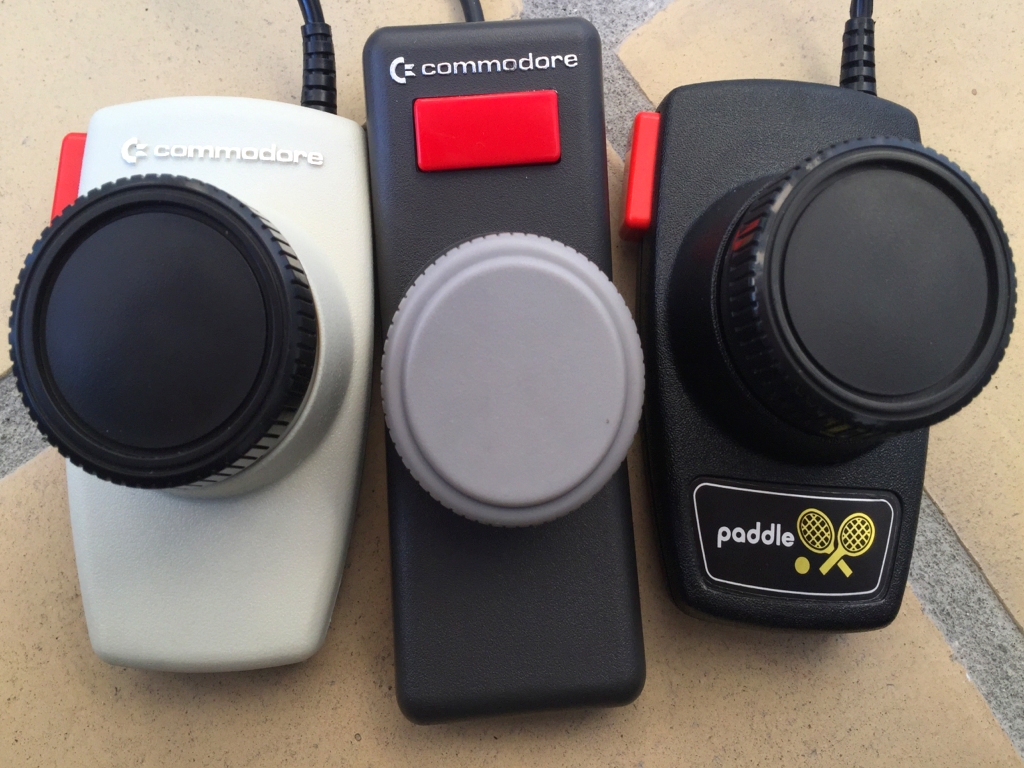 How about them odd-looking Commodore 64 paddle controllers, huh? I can’t say that I have actually owned (or even felt that I missed) a paddle controller back in the 1980s. So why do a review on them? Well, it turns out that quite a few games take advantage of this type of controller including classic games like Pong and Arkanoid. And most importantly, the games become so much more fun to play when using the right controller!

Paddle controllers can easily be recognized by their big bulky knobs placed on top of them. Turning the knob usually controls the movement of an object along one axis (i.e. up and down in the classic game of Pong). I have collected three commonly available paddle controller systems that can be used in Commodore 64 paddle enabled games. The controllers are the Commodore VIC 20 paddles, the Commodore Model 1312 paddles and the Atari 2600 standard paddles.

The knob (or paddle wheel) is mechanically coupled to a potentiometer inside the controller case. The position of the paddle wheel alters the voltage going to the SID sound chip. Furthermore, the SID chip can differentiate among 256 unique steps, which makes the paddle controller a highly sensitive device. Each joystick port can accomodate two analog input devices (like a game paddle) hereby allowing a total of four paddles to be connected simulataneously. The paddle controllers in this review therefore come in pairs.

I have managed to compile a list of 41 paddle games for the Commodore 64. These are the games that I have played using the three paddle controller systems described below. There may be more Commodore 64 paddle games out there, but these were the ones I could find.

…and the paddle battle is about to commence…

I got this set of new old stock (NOS) paddles from the Sinchai retro shop before it closed. I only paid about 11$ for them and I quickly found out why… Besides being ugly, bulky and flimsy, they also make it extremely hard to use the fire buttons due to the location in front of the knobs. Using the controllers in games which heavily depends on the fire button (e.g. Panic Analogue from goin’ Sideways) made my hands hurt after a short while. Nevertheless, they work but I would not recommend them as a first choice. To be honest, I threw them back in the nice box they came in after about 30 minutes of gameplay…

The inside of the paddle looks like this. They should have 470kΩ potentiometers but I measured them to be a little higher at 625kΩ.

This is a very well preserved set of Commodore Model 1312 paddles that I got cheap off the internet (like 20 $). The paddle case is smaller and the plastic feels sturdy. Contrary to the Commodore VIC 20 model described above, the fire button is placed where I would normally have my thumb (holding it the controller in my left hand and turning the knob with my right hand) and it is much more responsive. This makes these controllers so much more comfortable to play with.

The inside of the paddle looks like this. They should use 470kΩ potentiometers and I measured them to be 465kΩ.

The paddles can also rotate their knobs by 300° and have a sensitivity of approximately 135° which is quite a lot especially if a game dictates that maximum movement is performed often during gameplay. Not a biggie, but I like the paddles to be just a tad more responsive.

The atari 2600 standard paddles have different potentiometers which makes them more responsive in comparison to the controllers made by Commodore. However, the shape and location of the fire buttons and knobs converge with the Commodore Model 1312. The only visual differences are the paddle color, the sticker and the logo.

The inside of the paddle looks like this. They should have 1000kΩ (1MΩ) potentiometers as written on them, but I measured them to be 843kΩ.

The paddles can rotate their knobs by 300° and they have a sensitivity of approximately 90° which makes them the most responsive set of paddles of the battle. I really like these paddles and they quickly became the ones I used exclusively for playing the different paddle games on the list.

Paddle games are fun and using a real paddle controller is much more satisfying compared to a standard joystick. Controlling is faster and more precise, making it possible to focus on the gameplay instead of how rudimentary joystick inputs can be, especially when the game is made for paddles. However, all games on the list suffer from ‘paddle jitter’ which is a rapid shaking or unwanted movement of the on-screen character. This is mostly within acceptable limits, but may degrade the gameplay if the game calls for very precise movements. As a side note, Panic Analogue is the only game that has minimized (or even eliminated) this problem by actively adding a software filter. I did not notice any mentionable jitter in that game with any of the three paddle models used.

As written before, I did not like the feel of the Commodore VIC 20 paddles and I cannot recommend them even if they can be bought cheap. They feel flimsy, the fire buttons are unresponsive and your fingers will deform after a few minutes of gameplay. The paddles deprive the gaming experience from some of the smoothness that a well-made paddle game has. With all due respect – save the money and just don’t buy them!

So the paddle battle has come down to the remaing two contestants. The looks and the feel of the knobs and cases are identical on these two paddle sets. The same holds true for the fire buttons that are responsive and never let you down. The only difference is the sensitivity. The Commodore Model 1312 knob has to be turned 135° in order to move the Arkanoid ‘Vaus’ thingy at the bottom of the screen from one side to the other. In my opinion this is a lot for a fast paced game and I often found myself ‘hunting’ the ball as I could not move the knob fast enough to keep up…at least that is my excuse for not getting very far… On the other hand, the Atari 2600 standard controllers have a sensitivity of 90° making them faster, more responsive and clearly my favourite choice of paddle.

That being said, chosing the optimal set of paddles for Commodore 64 paddle games is a matter of taste. It all depends on the game played. Some games call for fast movements and a responsive fire button (e.g. Arkanoid & Panic Analogue) while others, like driving games (e.g. Le Mans & Night Driver), may not need the fastest and most precise steering. In my opinion I would opt for the Atari 2600 standard paddles as they are a safe bet when entering the field of paddles games, even if it hurts my ‘Commodore heart’ a little to recommend a non-Commodore product! Thus, the Atari 2600 standard controllers wins this round of the Paddle Battle!

In conclusion, the most important thing is not to miss out on the fun of playing paddle games with a dedicated paddle controller! So just get a paddle and start playing!