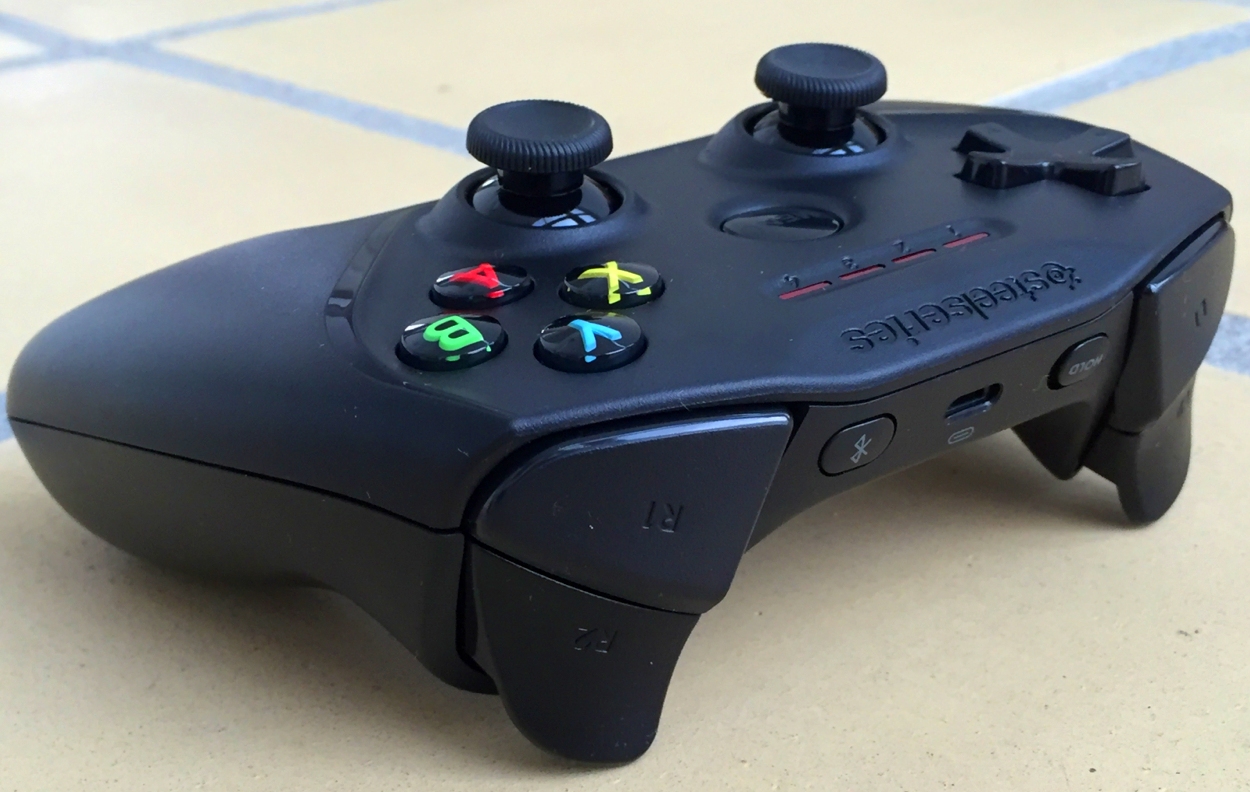 Looking into a modern day game controller may seem a little off compared to what are usually the general topics of Breadbox64.com. Nevertheless, as I enjoy the occasional arcade inspired shooter or platform game on my Apple devices, I thought that I would give the Steelseries Nimbus wireless controller a go. So if you are a true hardcore console gamer or expect a serious opinion on how it performs in Final Fantasy V (which I have actually never played and just uses it to name-drop…) or similar games, this may not be the post for you. However, if you are just sick and tired of playing Giana Sisters on your Apple mobile device because you simply loathe the pathetically small on-screen areas that the game developeres call a ‘joystick’, you may have come to the right place!

The Steelseries Nimbus wireless controller was released alongside the new AppleTV (4. generation) and the reason why I bought it in the first place. I had already tried a few games with the new Siri Remote control that came with my AppleTV and it is just horrible for semi serious gaming (or maybe my hands are just too big to feel comfortable using it…). The Nimbus controller costs around 50$. Other controllers are available (i.e. Mad Catz C.T.R.L.i, Steelseries Stratus series,  Hori Horipad etc.) but I opted for this one as it is recommended by Apple and I like the looks of it. It has two analog sticks, a D-pad, four colored buttons (A, B, X, Y), 4 pressure sensitive triggers on the front and a large Menu button (for navigation) on the top side of the controller. The internal rechargeable battery is supposed to last 40+ hours before being recharged and the pressure sensitive buttons should give very precise control.

The top of the controller holds a large menu button and four LEDs for identifying what number the controller has been assigned if you have multiple controllers. The lights also flashes when the battery is low and they light up when being charged.

The controller comes in a very nice and sturdy cardboard packing. The side of the case lists all the compatible Apple products while the bottom has the specs of the controller.

The Steelseries Nimbus wireless controller looks very much like any other modern console joypad as known from Sony and Microsoft. Figuring out how it works is also pretty straight forward. The buttons are responsive and solid. The feel of the controller is great and the weight balance is perfect. I was able to play with it for several hours without any sign of finger fatigue. Setting it up is a breeze as it just needs to be turned on and paired via Bluetooth on the target device (iPhone/iPad/AppleTV). There is an app for the Nimbus controller which has a list of all supported games.

Charging is done using the Lightning port at the front of the controller.

I started off by playing Giana Sisters on my iPad as the game supports the controller. Movements can be done using the D-pad, while fire and jumping are with the colored buttons. However, playing with a dedicated game controller on an iPad just seemed a little silly so I moved on and downloaded a few game titles made for the AppleTV. Playing on the AppleTV was the reason for buying the controller in the first place (and nothing beats lying down in a supine position on the couch with a soft drink within reach…).

So I got some ‘one button’ games (Canabalt, Badland, Jetpack Joyride and Alto’s Adventure)… 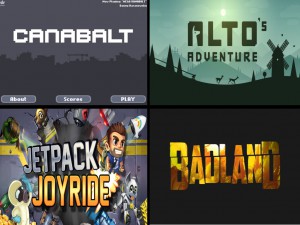 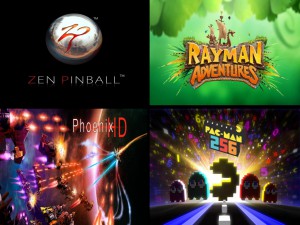 …and a couple of race games (Asphalt8 and GT Spirit).

The first thing that struck me was that all available games for the AppleTV have to be able to be played with the Siri Remote. This really limits the possibilities when playing with a dedicated game controller like the Nimbus. The ‘one button’ games of course only need a single button to be played. Playing them with the Siri Remote are definately possible, but a game like Badland actually supports analog inputs meaning that the pressure sensitive front triggers made it so much easier to control the movements of the game character. Playing Zen Pinball is quite fun as the front triggers activates the flippers. Pac-man 256 uses the D-pad to move around and Phoenix HS automatically shoots all the time so all you have to do is move your spaceship around, drop a bomb or use your lasers to kill enemy ships. The racing games both have beautiful graphics, but the throttle is always floored and all you have to do is steer, brake and activate an occasional nitro boost. All these games exhibited smooth gaming experiences and I found them really enjoyable to play using the Nimbus instead of the constant fighting to hold on to the small Siri Remote.

During the Nimbus testing (which more than once went on into the night…) I got the feeling that I was using a highly sophisticated piece of gaming controlling hardware for very simple input commands. The Nimbus may therefore be a little overkill in the sense that it is a thoroughbred game controller used for games which only require a few simple inputs. I admit that I may have tested the Nimbus controller with a bunch of ‘not-so-optimal’ gamepad titles. However, most of these games were either highly recommended or popular downloads, so I think they do represent the general way of controlling games for the AppleTV. Nevertheless, playing games with the controller completely removed any souce of irritation that I had felt previosuly when playing games on my Apple devices. As a side note, the Rayman Adventures platformer was the only game I found that really put the Nimbus into play.

The Steelseries Nimbus wireless controller is a great add-on for all iPad/iPhone gamers who are sick and tired of using the on-screen controls or AppleTV (4. generation) users who miss something when using the Siri Remote for gaming. The Nimbus wireless controller certainly brings the console feeling of gaming to your Apple devices even if the games only require quite rudimental control inputs. Now the game developers just need to mature their games a bit to take full advantage of the capabilities of the gamepads and not just for the flimpsy Siri Remote. I highly recommend this controller!

And yes, Giana Sisters is sooo much more fun to play when using the Nimbus controller 🙂