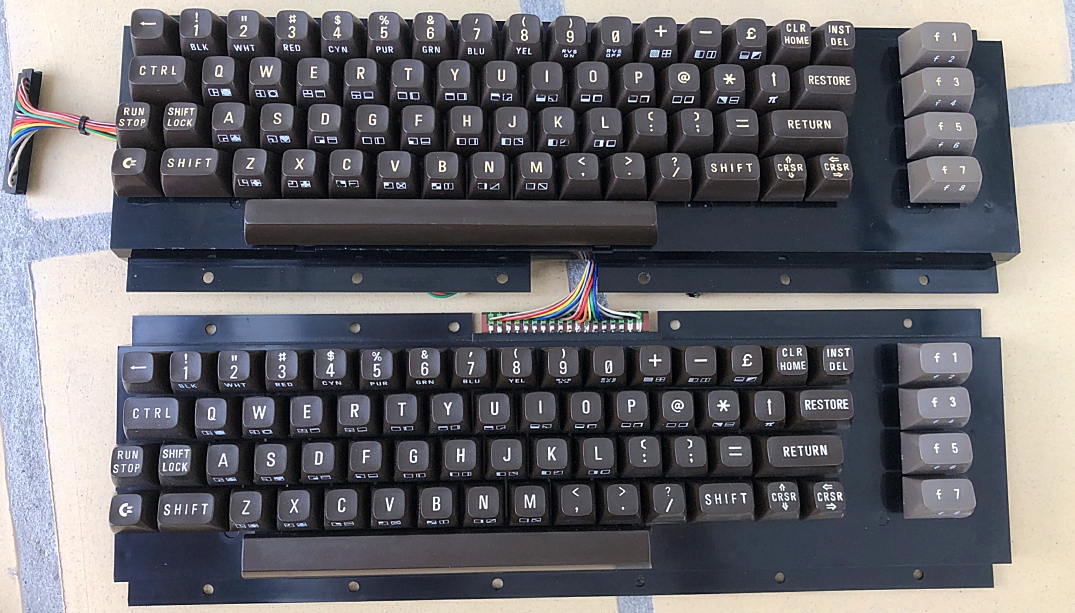 I came across this very well preserved Commodore 64 keyboard and thought I would share some details. The keyboard is the third (and last) generation of keyboards originally created for the Commodore VIC-20 home computer. It has a tall, thin font similar to Helvetica Narrow and the keycap shape is almost identical to the later spring operated C64 keycaps (more on that below). When the VIC-20 was discontinued, Commodore shipped leftover VIC-20 keyboards with the Commodore 64 breadbox styled computer. The keyboard is fully functional with the C64 but is build a little differently.

The biggest difference is the lack of springs underneath the keycaps. The plastic pegs are white and not black as in the later C64 keyboard versions. The domed rubber feet makes the keyboard feel quite sluggish and has to hit a little harder compared to the later spring operated keycaps. The activation pads are not protected from oxidation as the later keyboards.

The Spacebar has a different shape and is mounted differently on the early C64 keyboard when compared to a standard Mitsumi C64 keyboard. The stabilizer system of the Spacebar is also different.

Some Commodore 64 keyboard pegs/keycaps have a clear visual difference as this ‘Strange C64 keyboard’ described previously does (link). The shape of the early C64 keyboard plastic pegs also differ from later C64 keyboards. The domes function for activating the keys. The underside of the keycaps are also different. The 2u key (Return key) and the 1.5u keys (Function, Restore and Shift) only have one female socket. This makes the keycaps non-interchangeable with newer versions of the C64 keycaps! Without a caliper, the peg sizes look identical to the newer C64 keyboard pegs.  However, there is a difference of 0.25mm in material thickness of the ‘cross’ part of the peg tops. This difference is more than enough to cause damage if newer version keycaps are tried being installed into the early version C64 keyboard. The same hold true for the 3D printed adapters I use for my MechBoard64’s (link).