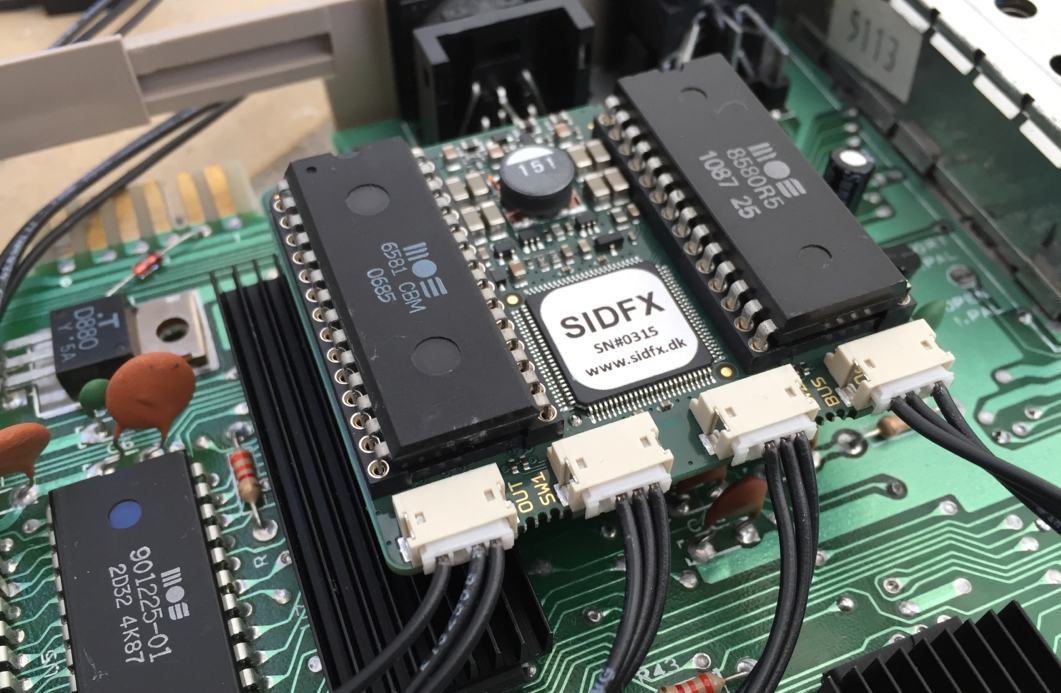 The semi analog SID chip (Sound Interface Device) is an electronic music synthesizer and its distinctive sounds are easily recognized by any Commodore 64 owner. Back in the days, most SID tunes ended up in games or demos to basically support the graphics on the screen. As many music composers love the characteristic timbre produced by the SID chip, new music is still being made for the Commodore 64 music and demo scene. In this context, the High Voltage SID Collection (link), a hobby project which organizes C64 music for both musicians and fans alike, currently has more than 48.000 SID files in their archives including the old tunes as well as newly produced music. Downloading the SID music collection is free and the vast amount of music can easily be played on modern computers using a Commodore 64 emulator and a SID player. However, nothing beats the sound of an original Commodore 64 SID chip residing in an original machine and played on an old fashioned CRT TV or a stereo sound system!

Whenever playing SID music files (a.k.a. SID’s), it quickly becomes apparent that the tunes sound differently depending on the SID chip version they were created on – the 6581 or the 8580. The former can be found in the older C64 long boards (e.g. Assy 250425 & 250407), while the latter version can be found in the newer short boards (e.g. Assy 250469). Even though both chip versions were produced by Commodore (MOS Technology or CSG) they each have a distinct sound. This means that music composed using one chip may sound differently when being played on the other chip version. These differences are intimately connected to various differences between the chips including the waveform generators, the filters and the separation between the analog and the digital circuits. As each SID chip version runs on different voltages, they cannot be swapped without some sort of hardware modification. At least not until a few days ago when I recieved this newly produced piece of hardware known as the SIDFX (link)!

The SIDFX is i dual SID chip solution which makes swapping between SID chip versions extremely easy. Mounting one of each SID chip version in the device, flicking a toggle switch will automatically switch between the 6581 and the 8580 chips. It really doesn’t get any easier than that! And there is no need for soldering either. It even plays the few stereo SID’s in the High Voltage SID Collection using both chips at the same time (for this option it is recommended to install the same chip version). Unfortunately, only one batch of 400 pieces were made and the pre-order list was filled rather quickly. So I guess I got lucky 🙂

The SIDFX comes with two precision sockets for installing the SID chips of your choice. The four beige sockets at the edge of the board is for connecting cables for two 3-point toggle switches, a 3.5 mm mini jack with a line level signal and a cable with grabbers to allow stereo addressing. At the bottom of the board is a male precision socket for easy installation in any Commdore 64, regardless of the motherboard version (long board, short board, C64 Reloaded). The SIDFX comes with a riser socket to increase the distance from the other components on the C64 motherboard, hereby mimimizing the risk of breaking other components and/or short circuiting anything. Finally, the device comes with a heap of cables. The grabbers are color coded to make the installation as user friendly as possible.

The Commodore 64 Reloaded boards (link) have ZIF sockets installed for most of the larger chips (except for those who opted for precision sockets during the email auction prior to the official release). If the C64 Reloaded is installed in a Commodore 64C case (link), the total height of the SIDFX will hinder the keyboard installation. To circumvent this problem, a special SIDFX Adapter can be purchased to reduce the height of the installation.

Installation in a C64 Reloaded and a Commodore 64 Kickstarter case (identical to the beige Commodore 64 C cases). To ensure clearence between the motherboard and the device a self-adhesive rubber foot was mounted on the component in the middle section of the device as shown here.

The riser socket has to be moved from the SIDFX to the C64 Reloaded adapter in order to level things. If not, the board will be skewed like this (memo to self, RTFM!).

Before turning on the C64R, the motherboard must be configured as if a 6581 SID chip was installed to generate less heat during operation. This setting should be used regarless of the type of SID chip version is actually installed in the SIDFX.

Installation in an Assy 250407 long board and a breadbox case. The SIDFX goes into socket U18.

Installation in an Assy 250425 long board and a breadbox case. The SIDFX goes into socket U18…

The riser socket allows for a sufficient clearence of the components underneath the device. No bending of components is needed!

Installation in an Assy 250466 long board and a Commodore 64 C case. The SIDFX goes into socket U18. The riser socket has to be removed from the device if the machine has this type of metal shielding. Otherwise it will not fit! Alternatively, the shielding can be removed…

The fit is tighter without the riser socket, but the installation is still effortless.

The cooling fingers above the SIDFX have to be bend a little to make it fit underneath.

Installation in an Assy 250469 short board. Easy fit with the use of the riser socket.

All sound tests were carried out using an Assy 250425 Rev. A  (link) motherboard. The cables were mounted and the grabbers for stereo mode attached according to the online manual. The total installation took me less than 5 minutes including disassembly of the case, mounting the SIDFX and reassembling everything again. No sweat!

A configuration tool can be download from the SIDFX site and run using the Commodore 64. I simply copied it to the SD card of my 1541 Ultimate II (link). When the config tool is loaded, the functionality of the the 3-position SW2 toggle switch can be modified. The device automatically detects the SID chips installed so there is no need to input this information manually! The position of the SW2 toggle switch highlights the current selected position. Each position can then be configured by the user to mono or stereo, address-space to map, external input and the amount of digi-boost needed for the 8580 chips. I found that adding 12dB of digi-boost to my 8580 (SID 2) would provide about the same volume when swapping between the 6581 (SID 1) and the 8580. The program interface looks like this.

It’s really easy to program the device using the config tool. During the process, informative text is provided on the screen which clearly explains each setting. When done, the configuration can be saved by pressing F8 (Shift + F7/F8 keys). In order for the changes to take effect, the C64 has to be reset/rebooted otherwise nothing will happen. The same holds true when swapping among the three configurations. It is therefore not possible to switch among the pre-sets in real-time! It took me quite some time to figure this out… (edit: this information is now available in the online manual)

The other 3-step toggle switch (SW1) can be used to instantly swap between the installed SID chips without rebooting the system. During playback, the left and right positions of the switch will provide a C64 mono output using either SID 1 or SID 2, hereby routing the mono signal to both output channels of the 3.5mm jack. This option makes it extremely easy to apply the best sounding SID chip for each tune (a 6581 and an 8580 chip must obviously be installed for this to make sense…). If the center position is chosen, the audio output is controlled by the active SIDFX configuration (the position of SW2).

For playing stereo SID’s, the cable grabbers must be installed. For an optimal sound experience, it is recommended to use identical SID chip versions (e.g. two 6581’s or two 8580’s). By setting one of the configuration profiles to stereo (and maybe even adding some digi-boost if two 8580’s are used) and setting SW1 in the middle position (to give control to the active SIDFX configuration) beautiful stere can be produced!

Here is a small video showing the SIDFX Sound Mod in action:

The SIDFX costs 75 Euros (≈ 84$) for the main unit including cables, while the optional C64 Reloaded adapter set me back another 11.5 Euros (≈ 13$). In this regard, the SIDFX may not be for the average Commodore 64 user which I don’t think was the intention of the product anyways… However, as all 400 units were sold out pretty quickly, a lot of people, including myself, found the price tag more than acceptable. And you do get a real quality product! Just the case and the wrapping that the device came in were professionally looking. The unit itself  is well-thought-out, programming it using the configuration tool is easy (I mean really easy!!) and it fits inside all versions of the Commodore 64 or at least those I have in my collection. And no soldering is needed!

Using the 3.5mm mini jack plug should be less noisy compared to the sounds going through the video connection. The line level signal coming from the SIDFX means that some sort of potentiometer should be used to adjust the volume during playback. This is easily accomplished with a headphone set with a volume knob or a regular stereo pre-amplifier. I use a B&O mx4000 CRT TV with great speakers, so I just use the TV volume.

Is the SIDFX worth the money? The short (and honest) answer is yes! As I really enjoy SID music, I usually have some HVSC tunes playing in the background while I do repair’s or mod my Commodore 64’s. At the flick of a switch, each tune can be played as it was inteded to by the composer. Therefore, the SIDFX is really a no-brainer for any SID enthusiast! Now all there is left to hope for is that the producers of the SIDFX (Devia & Lotus of Ancients and Scarzix of Offence) will make another batch of these beautiful devices. This way even more people can enjoy SID tunes as they were really intended to sound. Well done guys!

5 comments on “The SIDFX Sound Mod”