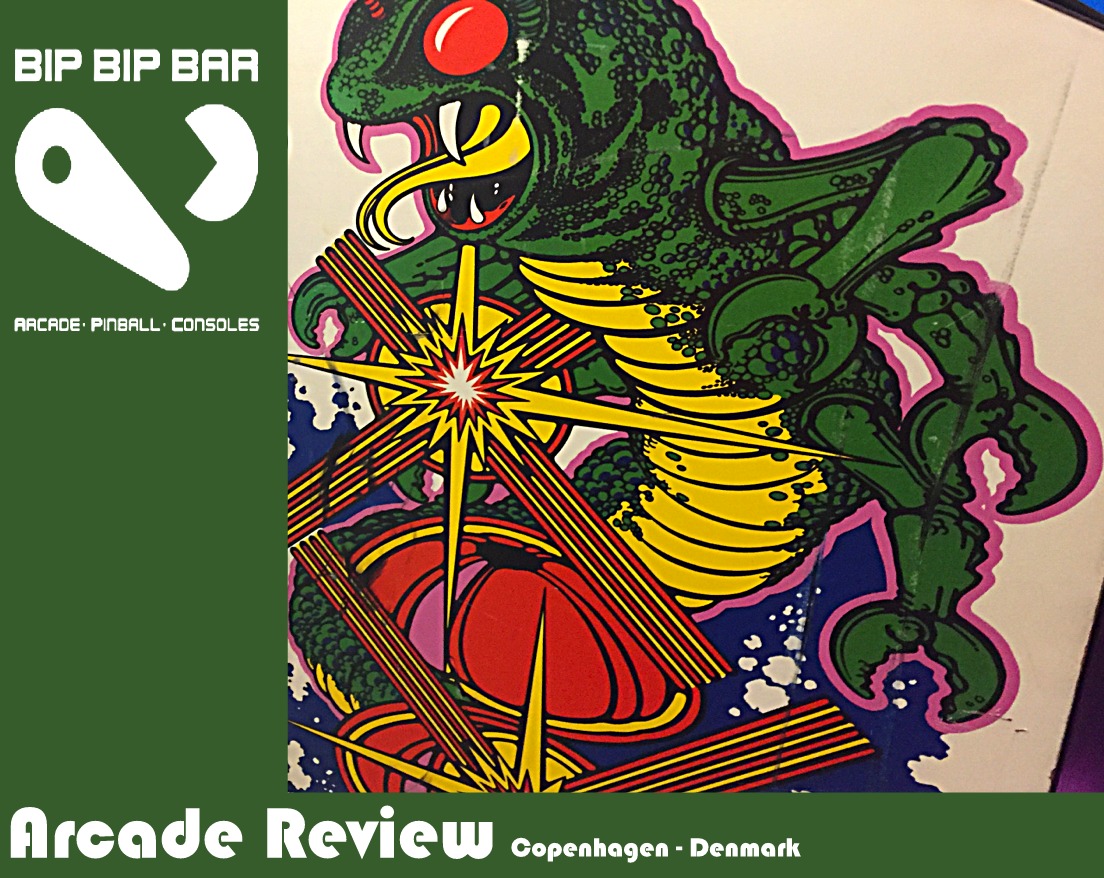 I arrived at the Bip Bip Bar arcade hall late in the afternoon wearing my favourite t-shirt with ‘Arcader’ written on the front. An old rusty female bike was slapdash parked next to the stairwell leading to the basement entrance of the arcade. As I opened the sticker covered front door and entered the realms of the facility, I was immediately dazzled. It was like leaping back to a cherished childhood memory when all that mattered were riding my plastic skateboard and playing video games with friends – a cozy feel-good sensation in my tummy that I thought I had forgotten decades ago. The dimmed arcade was packed with people – their faces were only lit by the faint light of dozens of arcade monitors, flashing pinball machines and old tubed TV screens. Comfortable lounge chairs and sofas were scattered across the entire arcade and along the walls were retro arcade gear that I have only heard tales of – and they were all locked ‘n loaded and ready for some serious old school gaming!

My trip to March chilly, but warm-hearted, Copenhagen, Denmark had been without food for many hours so I almost instantly ordered a vegan sandwich (the arcade doesn’t serve meat…) and an organic beverage from the bar. With my mind set on raising my blood sugar level I dug into the delicious meal that the very bearded fella in the bar had handed me with a friendly smile. While my brain processed the surprisingly positive taste explosion of the meatless sandwich, one of the local arcade legends entered the premises. It was Kim ‘Kanonarm’ Köbke (aka the ‘Canon Arm’!! – link) who currently holds the official world record in Gyruss (and un-officially the third highest score in ‘1943 – The Battle of Midway’). I instantly felt that this night was going to be epic!

Probably the Friendliest Arcade in the World:

The Bip Bip Bar arcade (formerly known as Chassis Arcade) is located in the Nørrebro district of Copenhagen, Denmark (link, link). The area is the most multicultural part of the city and also holds the last bastion of working class Copenhageners (the North West). In this cultural morass, two friends (Chriss & Julian) decided to make their own arcade hall and hereby contribute to the retro gaming scene of Denmark. The concept is simple – it’s free to enter the arcade but games cost between 2 and 5 Danish Kroner (∼25-75 US cents). The environment is extremely friendly, retro gaming is the primary topic of discussion, and playing the consoles are free! The arcade is open 4 days a week and it’s a 10 minutes walk from the main train station and City Hall.

During my 5 hour visit, several regulars visited the arcade, including the owners Chriss and Julian. They were easily recognized by their ‘un-conventional’ hair colors which are currently pink and white… 🙂 You guys rock!

My primary focus was on the up-right arcade machines and Bip Bip Bar currently has about 30 of them (no flimsy plastic Japanese Candy Cabs here!!). A list of their arcade games can be found here (link). Enjoy the Bip Bip Bar Walkthrough!

Only a few fighting games can be found at Bip Bip Bar, which is in complete contrast to the Asian arcade hall that I have visited previously (link). I had my very first game on an original Centipede arcade machine with the trackball.

The arcade also holds several consoles (Nintendo’s, Sega’s, Amiga’s, Commodore 64’s, Game boy’s and heaps more that I cannot remember!) and much to my surprise this working copy of PONG (Radotin’s Tele-sports). It does not get much more old school than this!

Let there be Darkness:

With the lights dimmed, the arcade is just like I remember the golden days of arcade gaming at the local grill. Only difference is that Bip Bip Bar plays tunes of the 80’s in the background. It seemed to me that Donkey Kong was just a tad friendlier to the sounds of Baltimora’s Tarzan Boy…

An up-right version of OutRun. Sweet!

During the night, several fathers showed this Bubble Bobble machine to their teen sons, explaning how to control the Bub and Bob characters… old school meets new school!

I’m pretty sure this Ghost ‘n Goblins machine is possessed! I never managed to reach the first boss 🙁

My nemeis of the night! An original Donkey Kong machine with a high score of 889.600 set by one of the locals (not me as I apparently stink at this game…). I guess that underneath all the friendliness of the Bip Bip Bar arcade hides some real hardcore gamers. Respect!!

Wednesday is competition night! This time it was the Amiga game of Lotus II (of course networked!!) that was the center of attention!  The Bip Bip Bar co-owner Chriss (with the white hair) also took part of the competition… The first prize went to one of the local heroes named Amiga Troels. It’s all about having fun and living the dream of past decades! To the design conscious hardware freaks: Yes, it’s a glossy red Bang & Olufsen BeoVision MX4000 CRT television that the second player is gaming on… Gotta use that sweet looking Danish design, right?

Bip Bip Bar also has a section with pinball machines. I threw quite a few coins towards these machines to keep them satisfied…

A short video of the arcade section of Bip Bip Bar. Enjoy!

What can I say to wrap up my visit to the Bip Bip Bar Arcade in the heart of wonderful Copenhagen, Denmark? I could easily find heaps of superlatives for the cozy feeling of the arcade. I could also come up with tons of reasons why any retro-gamer have to visit the aracde or why anyone who have ever played an arcade or console game in the 80’s should go there! However, what I really like the most about this particular arcade is the genuine arcade spirit that lies behind it! The story of two friends who wanted to share their retro gaming passion with whoever wanted to join in and contribute to keep the place alive, is simply awesome! While most Western world arcade’s have to close down after a while, these two ‘hair color aficionados’, have created a sustainable concept that attracts friendly people who would rather play on 30 year old upright wodden cabinets in a dark basement, surrounded by peers, than sitting at home playing in high definition on modern consoles. What they have created is the pleasent sensation of coming home when entering the arcade. This instant feeling of being welcome is also why the Bip Bip Bar probably is the friendliest arcade in the world… Hat’s off to Julian and Chriss for making the best arcade hall I’ve ever been to – including past and present!  Game on guys!